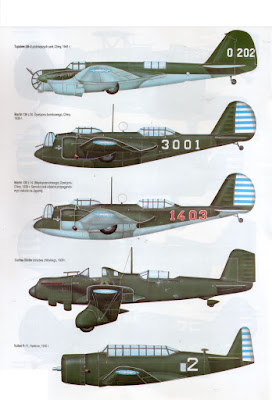 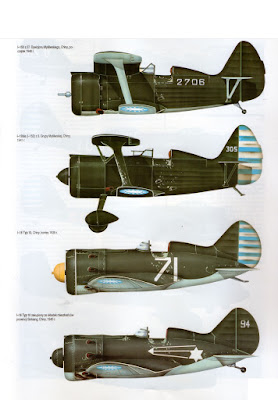 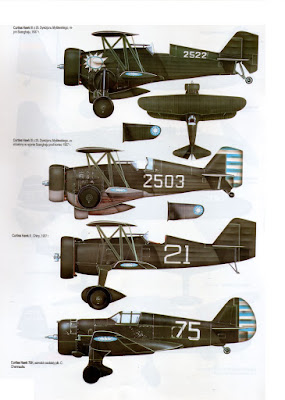 The Republic of China Air Force (ROCAF) had only 700 obsolete warplanes when China was attacked by Japan at the start of the Sino- Japanese War (1937–1945). Established on paper in 1920 but only taking real form in 1928, the ROCAF was a hodgepodge air force assembled from the private air forces of conquered and coalition warlords, as well as some military aircraft purchased by the Guomindang from Britain, France, and the United States. During the mid- 1930s the Soviet Union provided fighters and bombers to the Guomindang, as well as pilots to fly them against the Japanese early in the war. Soviet and other foreign trainers taught dog-fighting skills to Chinese pilots, who engaged Japanese Zeros in Russian biplanes and old American P-26 Boeing and Curtiss Hawk fighters. While Soviet pilots impressed many, their aircraft were inferior to more nimble Japanese fighters. The ROCAF was more effective in bombing Japanese shipping on the Yangtze and strafing and bombing Japanese trenches during the siege of Shanghai. As Joseph Stalin looked to secure his Far Eastern frontier through rapprochement with Japan, Soviet air force aid, advisers, and pilots were withdrawn from China in 1940. From 1938 American advisers arrived in China. Most prominent was Claire Chennault, who organized the American Volunteer Group to fly 100 P-40 fighters out of Burma and southern China starting in September 1941.

The Republic of China Air Force (ROCAF) was formed by the Kuomintang after the establishment of the Aviation Ministry in 1920. As tensions mounted between China and Imperial Japan in the 1930s, a number of smaller Chinese warlord airforce men and equipment became integrated into the ROCAF in a centralized effort to counter Imperial Japanese military ambitions.

During the Second Sino-Japanese War (1937–1945), the ROCAF participated in attacks on Japanese warships on the eastern front and along the Yangtze river including interdiction and close-air support for the Battle of Shanghai in 1937. Initially, the Chinese frontline fighter aircraft were mainly Curtiss Hawk IIs and IIIs and Boeing P-26Cs. These engaged Japanese fighters in many major air battles beginning on14 August 1937, when Imperial Japanese Navy warplanes raided Chienchiao airbase; "814" has thus become known as "Air Force Day". Chinese Boeing P-26/281 fighters engaged Japanese Mitsubishi A5M fighters in the world's first dogfight between all-metal monoplane fighters.

A unique mission in April 1938 saw two Chinese Martin B-10 bombers fly a mission over Japan, but dropping only anti-war leaflets over the Japanese cities of Nagasaki and Saga. It was a war of attrition for the Chinese pilots, as many of their most experienced ace fighter pilots, such as Lieutenant Liu Tsui-Kang and Colonel Kao Chih-Hang, were lost. Six months into the war, which is considered the beginning of World War II in Asia, the Chinese Air Force inventory of frontline American Hawk IIs and IIIss and P-26Cs were superseded by faster and better armed Polikarpov I-15s and I-16s as support from the Soviet Union grew and American support faded.

Through attrition and loss of their most experienced fighter pilots in the first half of the Second Sino-Japanese War, the Republic of China Air Force ultimately suffered irreversible losses in combat against the Japanese, and by the beginning of 1942 the ROCAF was practically annihilated by Japanese aircraft, particularly with the introduction of the Mitsubishi A6M Zero. The ROCAF was eventually supplemented with the establishment of the American Volunteer Group (known as the "Flying Tigers") with heavily armed and armored Curtiss P-40 Warhawks, and subsequently rebuilt each year following Imperial Japan's attack on Pearl Harbor with new aid and vigor from the United States.

The Sino-Japanese War started on 7 July 1937. At that time, Chinese sources estimated the Japanese could field approximately 600 aircraft (from a total of 1,530) against China’s 230 combat aircraft. During the first phase up to 1939, aerial bombing of enemy bomber formations was tried with indifferent results, and leaflet-dropping raids carried out over Japanese cities.

The Japanese bombing raids were also fiercely contested, sometimes with significant Japanese losses. After suffering heavy losses in the Battle of Wuhan in October 1938, most air force units were withdrawn for reorganisation and training.

In 1944, the USAAF U.S. 15th Air Force commenced joint operations in the China theatre. By this time the Chinese Air Force was mostly equipped with current operational aircraft types and was superior in all respects to the opposing Japanese air forces which remained.

Posted by Mitch Williamson at 6:40 AM No comments: 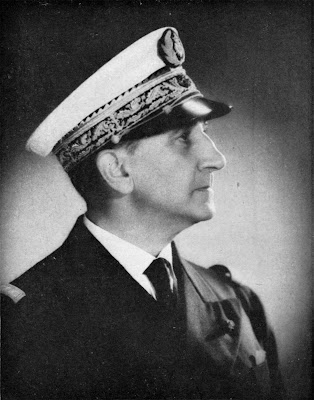 On 13 January 1939, Decoux was appointed Commander-in-Chief of the Naval Forces in the Far East by President Albert Lebrun. He assumed his new appointment, in the rank of squadron vice-admiral (vice admiral), on 12 May.

In 1940 he was named French governor of Indochina, succeeding General Georges Catroux.
Like his predecessor, Decoux initially wanted to continue the fight against the Axis powers, but he swore allegiance to Pétain's regime after realizing that his meager armed forces were no match for the Japanese.

Decoux reportedly received demands from the Japanese in early August for permission to move troops through Tonkin (later Vietnam) in order to build air bases and block Allied supply routes to China. Decoux cabled his Vichy superiors for help, but when no help was forthcoming signed a treaty on 20 September 1940 opening Haiphong harbor to the Japanese giving them the right to station troops in the region.

Decoux worked to improve relations between French colonists and the Vietnamese, establishing a grand federal council containing twice as many Vietnamese as Frenchmen and installing Vietnamese in civil-service positions with equal pay to that of French civil servants. The Indochinese Federal Council, which was composed only of Indochinese, and later the Grand Federal Council, were the formal structures that Decoux felt he needed to build to develop the Indochinese federal consciousness simultaneously with the elevation of the elite. Rather than a legislative or executive body, the Federal Council in both its forms was a body constituted of non-elected elites who gave their opinions to the Governor General to assist him in his decision-making, and served as a forum to strengthen the relations between these elites and the authorities. The GFC replaced the IFC in 1943 by introducing 23 French representatives (from the economy's principal sectors, making it, according to Decoux, more representative) and adding five local members, thereby ensuring that the Indochinese presence outnumbered the European. Decoux believed this would reverse the reluctance of the locals to believe in the genuineness of the politics of collaboration, and he most likely wanted to show goodwill toward the Indochinese peoples following Roosevelt's public statement, heard on BBC radio and known to Decoux and his entourage, that maintaining French sovereignty in Indochina was not a principal objective of the US.

Decoux enforced the discriminatory laws against Gaullists and Freemasons, as well as the anti-Semitic Statute on Jews, despite decrying the laws harmful to the Vichy agenda.
One author claims Decoux to have been unconcerned during the famine of 1945. During this time over one million Vietnamese died of starvation in the countryside and urban cities and the author asserts that the Decoux government did nothing to help the Vietnamese peasants, farmers, and poor, despite soliciting and courting the Vietnamese elite. However, archival records show Allied bombardment of railways and the requisitioning of boats by the Japanese made it impossible to transport rice from the Cochinchina to Tonkin.

On 9 March 1945 the Japanese took direct control of the government and ousted Decoux, establishing the Empire of Vietnam.

Arrested and tried after the war, Decoux was not convicted. He was restored to his rank and prerogatives in 1949. He later wrote the book A la barre de l'Indochine. He died in Paris in 1963.

This composite French colony, comprising modern Cambodia, Laos, and Vietnam, did not come under Vichy control for some months following the French armistice with Germany of June 22, 1940. Meanwhile, Governor and General Georges Catroux closed the border with China in a vain effort to forestall Japanese pressure for concessions by ending French resupply of Jiang Jieshi and the Guomindang . French Indochina was a key launchpad for Japan’s nanshin strategy, and therefore the gesture proved futile. Upon receiving a Japanese ultimatum in July, Catroux was forced to agree to permit Japanese military bases in the north (Tonkin) at the end of August. His Vichy successor, Vice Admiral Jean Decoux, was not given a chance to complete peaceful negotiations even though he signed a base agreement on September 22 and accepted Japanese troops who crossed the northern border that day. Despite the absence of French resistance, local Japanese commanders conducted an active amphibious assault on Haiphong the next day. They probably sought to create a provocation for war akin to the Mukden incident in Manchuria in 1931 and the Marco Polo Bridge incident in northern China in 1937. But the French garrison did not oppose the landings.

Imperial General Headquarters was greatly displeased with the local Japanese commanders. Some officers were court-martialed, a rare thing in an Army used to disobedience from junior officers and its overseas garrisons. French forces fought against a Thai invasion of Laos and Cambodia in 1941, but the Thais had Japanese support and five Laotian and Cambodian provinces were ceded to Thailand. On July 21, 1941, the French agreed to Japanese occupation of the south (Annam and Cochin China). Japanese troops entered Saigon on July 24. In March 1945, the Japanese ended the long fiction of French authority by dismissing the French colonial government. As the French reoccupied the composite colony later that summer and fall, some Japanese deserters fought against them alongside the Viêt Minh . The Laotian and Cambodian provinces seized in 1941 by the Thais were returned to French control after the war.
Posted by Mitch Williamson at 6:29 AM No comments: