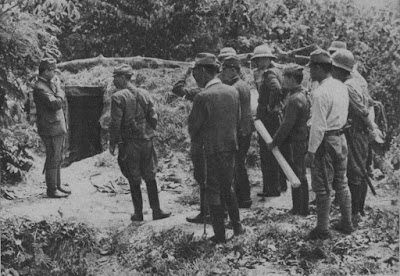 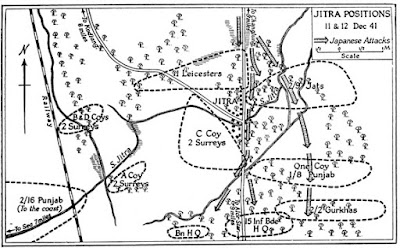 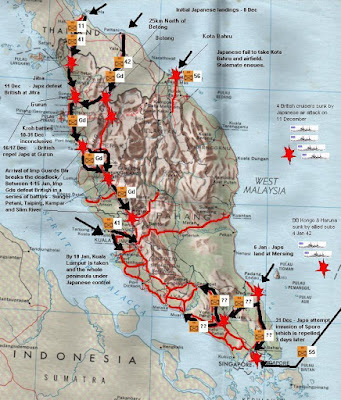 In a rapid advance, the Imperial Japanese Army overran British positions in northern Malaya, easily breaking through at Jitra, a strongly fortified line of wire entanglements and deep trenches astride the road to Alor Star. It was expected to be held for three months. An impromptu night attack by barely 500 Japanese soldiers drove off the defenders in a matter of hours. Along with 3,000 prisoners came large stores of ammunition, petrol and food. For the rest of the campaign, these frequent bags of supplies were laughingly called “Churchill’s allowance”. To turn British positions, baffling tactics were employed, such as night attacks, encirclement, sudden charges and small boat operations. To maintain the momentum of the advance, Yamashita Tomoyuki ’ s men rode bicycles. Tsuji Masanobu recalls how

the greatest difficulty . . . was the excessive heat, owing to which the tyres punctured easily. A bicycle repair squad of at least two men was attached to each company, and each squad repaired an average of twenty machines a day. But such repairs were only makeshift. When the enemy was being hotly pursued, and time was pressing, punctured tyres were taken off and bicycles ridden on the rims. Surprisingly enough they ran smoothly on the paved roads, which were in perfect condition. Numbers of bicycles some with tyres and some without, when passing along a road, made a noise resembling a tank. At night when such bicycle units advanced the enemy frequently retreated hurriedly, saying, “Here come the tanks! ” . . . Thanks to Britain’s dear money spent on excellent roads, and to the cheap Japanese bicycles, the assault on Malaya was easy.

And when necessary, the Japanese abandoned pedals and advanced through the jungle, carrying their bicycles on their shoulders. This the British found as disconcerting as attacks from the rear.

It was in fact the jungle that Yamashita Tomoyuki so brilliantly exploited. He realised the potential for outflanking movements when he saw it for the first time near Saigon. His previous posting had been Manzhouguo. Unlike him however, nearly all British senior officers regarded jungle and swampy ground as impenetrable natural obstacles. The shining exception was Ian Stewart, the commanding officer of the 2nd Battalion Argyll and Sutherland Highlanders. Having investigated the problems of fighting under tropical conditions, he took his men on training exercises designed to accustom them to both the advantages and disadvantages of military action in primary as well as secondary jungle. In the process, the Argylls banished any fears they had about plants or animals. “Cross - country movement through the jungle, ” Stewart wrote, “ and living in it for days at a time, not only by large parties but by small groups of three or four officers or NCOs, was practised until the jungle became a friend and not an enemy. ”

This familiarity saved the Argylls from destruction on several occasions: it also helped inflict an early reverse on the apparently unbeatable Imperial Japanese Army at Grik Road, inland from Penang. There the Japanese were shocked by a counterattack delivered from the jungle on each side of this thoroughfare. As Steward commented:

One of the arts of rearguard tactics in the jungle is time and space calculation . . . Quite genuinely it is a fascinating game, embodying as it does appreciations of ground, enemy dispositions, and above all the mind and speed of action of the opposing commander. But it is a nervy business, for a commander works with the jungle as a bandage over his eyes; there is no warning of an approaching crisis, and the situation will turn from blue sky to black storm in a minute or two. There are two rules that must never be broken: to hang on desperately to the initiative and to have plans ready and understood by all in anticipation of every eventuality.

Because the British had neither tanks nor an adequate antitank defence, Stewart ’ s use of the jungle alongside roads was critical in the battles which were fought to slow down the Japanese advance.

At the engagement for the bridge at the River Slim in early January 1942, a disastrous British defeat that sealed the fate of Kuala Lumpur, the Argylls improvised road blocks and threw Molotov cocktails at Japanese medium tanks. While the bottle - bombs proved less effective than those used by the Imperial Japanese Army at Nomonhan, there was no shortage of volunteers for the Molotov cocktail party. Through this encounter the Japanese came to respect the courage of Stewart’s men, who alone on the surrender of Singapore rode to the Changi prisoner - of - war camp. Impressed by their refusal to hand over their transport, Japanese sentries saluted the column as it went into captivity to the sound of bagpipes. Those Argylls who were sent to work in other parts of the Greater East Asia Co-Prosperity Sphere often found their distinctive bonnets attracted the attention of Japanese officers. In Thailand a sergeant - major was informed that “Argyll Scotsmen number one fighters ”.

Not that the Argylls ’ well - deserved reputation for jungle warfare did much to save Malaya or Singapore. Their capture was a foregone conclusion when British military doctrine firmly held that the jungle was impassable for large numbers of troops and that the situation was therefore overwhelmingly in favour of the defenders. It was on this assumption that the so - called fortress at Singapore had been built. Only a threat from the sea was ever seriously considered before the outbreak of the Pacific War. By the time Arthur Percival appreciated what was happening in Malaya, it was too late to adjust to Japanese methods of attack. Percival ordered the adoption of guerrilla tactics. Formations should reduce their transport as far as possible by sending all vehicles that were not immediately wanted well to the rear.

But as Stewart later commented: “New tactics cannot be learnt in the middle of a battle.” Another reason for Yamashita Tomoyuki ’ s victory was far better intelligence: he even knew the names of all the Argyll officers. The sheer speed of the Japanese advance gave the British commander - in - chief no chance of regrouping his forces for a last stand in southern Malaya, so that in February 1942 Percival was called upon to conduct his last campaign, the defence of Singapore.
Posted by Mitch Williamson at 8:10 AM