The Fighting Retreat of the British in Burma 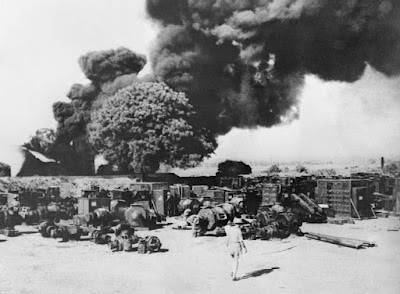 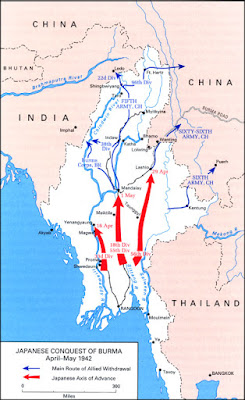 The only action comparable with the American defence of the Philippines was the fighting retreat of the British in Burma. There the last - minute appointment of William Slim turned a potential rout into a taxing withdrawal. On his arrival in March 1942, it was self - evident that the colony would not be able to offer sustained resistance to the 15th Japanese Army, whose tactics paralleled those used by Yamashita Tomoyuki in Malaya. Disaster first struck the British defenders near the Thai - Burma border. Having been forced back into Burma and evacuated the southern port of Moulmein, a stand was attempted at the River Sittang whose long bridge allowed access to Rangoon. The defeat of the 17th Indian Division on the Sittang was a terrible one, but Wavell ’ s strategy of holding up the Japanese as far away from Rangoon for as long as possible, so that reinforcements could be brought in to defeat them via this port, was militarily sound. It permitted the disembarkation of the 7th Armoured Brigade, originally destined for Malaya.

This strategy was unfortunately compromised by the commander of the 17th Indian Division, the highly decorated Jackie Smyth, who overlooked the possibility of Japanese flanking movements as he withdrew his forces to the Sittang Bridge. To send the whole division and its transport along a broken - down road was bound to be slow, even if the enemy did not interfere. To have left an inadequate guard on the bridge itself was foolhardy. On 21 February, news reached Smyth that large Japanese forces were already ahead of him en route for the Sittang River. Even though he ordered extra troops to hold the vulnerable eastern side of the bridge, as they took up defensive positions there, they could hear the ominous sound of enemy machine - gun fi re. A heavy Japanese attack took place the next day. Smyth got within sight of the bridge, but the failure to establish an effective defence well before the arrival of the Japanese, and the consequent inability to use the approach road, created a serious handicap. The loss of many radios complicated an already confused situation. Some of his troops managed to cross the river by boat, and Smyth set up his headquarters on the other side. Many others were still on the east bank when the order was given to demolish the bridge’ s central spans on 23 February. Up to the explosion, the Japanese actually thought that they were getting the worst of the fighting. Now they knew that although they could no longer capture the bridge intact, they had won the battle. Appreciating that the defeat meant the loss of Rangoon as well as southern Burma, Wavell sent Smyth home on retirement leave. In a matter of days, William Slim was called in and ordered to salvage what he could.

As the Japanese advanced northwards, Slim fought a series of well - conducted delaying actions. One of them, at Kokkogwa, north of Prome, ended in an unusual humiliation for the Japanese, who were so shaken by the experience that they failed to recover their dead, always a shameful omission. Already the new commander was sowing the seeds of a British recovery in the interest he showed in jungle warfare. He allowed Michael Calvert to raid Japanese lines with his locally trained guerrillas and was pleased to learn that the daring major, after an initial disagreement, got on well with Orde Wingate, Wavell ’s favourite. The meeting of these two enthusiasts for irregular tactics was to lead to the formation of the famous Chindits. Racing the Japanese and the monsoon, Slim led his battered troops into India with mixed feelings. He had shared their hardships, even sporting a beard like that of so many of his men until he noticed the hairs were coming out white. Thirteen thousand had been killed or wounded against a Japanese total of 4,000. He recalls how on the last day of the thousand - kilometre retreat:
I stood on a bank beside the road and watched the rearguard march into India. All of them, British, Indian, and Gurkha, were gaunt and ragged as scarecrows. Yet, as they trudged behind their surviving officers in groups pitifully small, they still carried their arms and kept their ranks, they were still recognizable as fighting units. They might look like scarecrows, but they looked like soldiers too.
Posted by Mitch Williamson at 8:06 AM