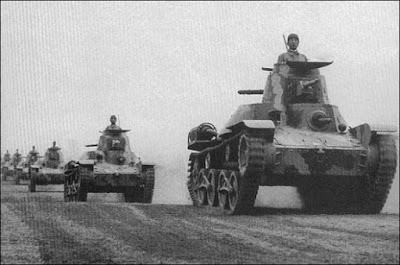 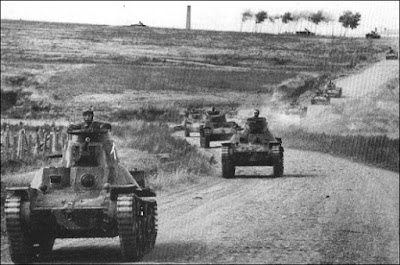 Japan’s military presence in and domination of Manchuria in northwestern China received a major victory with the end of the Russo-Japanese War in 1905. Under the Treaty of Portsmouth, Japan was required to withdraw its troops from Manchuria proper but gained a leased territory of the Liaotung (Liaodong) Peninsula in southern Manchuria, renamed the Kwantung Leased Territory, which included the fortress and port of Port Arthur. The army unit assigned to garrison the area and the Japanese-owned South Manchurian Railway (SMR), as far as Changchun, was named the Kwantung Army. From this date this army became the spearhead of Japanese imperialism in China.

With the railway administration working as a colonial power, running ports, harbors, tax collection, mines, and utility companies, the SMR turned the railway zone into a semiautonomous state, and the Kwantung Army was its security and police arm.

After World War I, Japan gained control of former German holdings at Tsingtao in China’s Shandong (Shantung) Province and deployed 70,000 troops from the Kwantung Army to Siberia to support the Whites in the Russian Civil War. The Japanese sought to expand their empire in Siberia, failed to do so, and withdrew in 1922.

In 1927, when Chiang Kai-shek’s troops were marching on Shandong to break the power of local warlords in the Northern Expedition, Japanese troops were sent to Shandong (Shantung). Soon Chinese and Japanese troops were clashing. Chiang withdrew his forces from the city of Tsinan, but the Kwantung Army attacked it the next day, killing 13,000 civilians.

Chiang turned his troops away from conflict with Japan. Tokyo, however, supported the Kwantung Army, issuing warnings to Chiang and Manchurian warlord Zang Zolin (Chang Tso-lin) not to attack Japanese forces or civilians. However, the new commander of the Kwantung Army, General Chotaro Muraoka, had other ideas, moving his headquarters in May 1928 from Port Arthur to Mukden, Manchuria’s main city, and preparing his troops to take control of the region.

Ready to move, Muraoka and his troops waited, firing telegrams to Tokyo asking permission to move. When Prime Minister Giichi Tanaka refused, the Kwantung Army’s officers were stunned. Muraoka decided to kill Zang Zolin, blasting a bridge as the warlord’s train crossed it on June 4, 1928. The Kwantung Army reported to Tokyo that Zang had been killed by Manchurian guerrillas. The truth came out anyway, and Tokyo could do seemingly little to control the insubordinate army and its officers, who had a lot of support in Japan.

But Tanaka was determined to punish the officers responsible for the assassination plot and recommended so to Emperor Hirohito, who agreed. But when the army as a whole objected, Tanaka temporized. He fi red Muraoka and told the public that there was no evidence the Kwantung Army had been involved in the plot. Then Tanaka resigned. The Kwantung Army’s officers had defied Tokyo and gotten away with it.

As the Great Depression wore on, the Japanese economy continued to crumble. Many Japanese army officers, angered by the economic situation, joined secret societies like the Cherry Blossom League, and a group of officers plotted to use the Kwantung Army to seize Manchuria for its rich resources. One of the key men was Colonel Doihara Kenji, who prepared a “Plan for Acquiring Manchuria and Mongolia.”

Chiang Kai-shek, meanwhile, had succeeded in unifying China under the Kuomintang, and Zhang Xueliang (Chang Hsueh-liang), Manchuria’s new warlord, supported the Nationalist, or Kuomintang, government. In 1931 clashes broke out between Korean farmers who were Japanese subjects and Chinese farmers over water rights.

Doihara went to Manchuria and determined that a Japanese attempt to seize Manchuria would result in international condemnation. An “incident” had to be manufactured to make a Japanese occupation of Manchuria seem China’s fault. In 1929 the Kwantung Army began to plot an incident under their new boss, Lieutenant General Shigeru Honjo, with Doihara as mastermind.

Japan’s civilian leaders did nothing to control the insubordinate Kwantung Army. The emperor, however, ordered Major General Yoshitsugu Tatekawa to bring a message from him on September 15, 1931, ordering the Kwantung Army not to take any unauthorized action. Unfortunately for Hirohito, Tatekawa’s assistant, Colonel Kingoro Hashimoto, was among the plotters, and he sent a message to officers of the Kwantung Army to let them know that Tatekawa was coming with imperial orders. When Tatekawa arrived in Mukden on September 17, Kwantung Army officers took the general to a party, where he became drunk.

That night Kwantung Army officers blew up a section of track on the South Manchurian Railway 1,200 yards from a Chinese army that failed to derail the night express. Kwantung Army troops then attacked and shelled the Chinese barracks, killing many soldiers. By 10:00 a. m. on September 18, 1931, Mukden was under Japanese control, Chang’s headquarters were ransacked, and his banks and government offices were occupied, as were a dozen other cities in southern Manchuria in a coordinated attack by Japanese units. Some 12 hours after their blast, Kwantung Army officers displayed to Western reporters the “proof” that the Chinese had tried to destroy the railroad, which was bodies of Chinese soldiers shot in the back lying facedown, supposedly cut down while fleeing the scene. The world was outraged by the political adventurism, and Tokyo was stunned. The emperor reminded Prime Minister Reijiro Wakatsuki that he had forbidden such action, and the foreign and finance ministers also objected. But Wakatsuki did not overrule his generals and colonels. The attack and subsequent conquest of Manchuria were accepted as a fait accompli.

From October to December 1931, the Kwantung Army, now empowered by Tokyo and advised by units of the Japanese army in Korea, expanded conquest of Manchuria, even plotting a coup in October to overthrow the civilian government in Tokyo. This attempted coup was ended when the leading plotters were secretly arrested. In December Wakatsuki resigned. Ki Inukai became the new prime minister, but General Araki, leader of the Kodo Ha faction, became war minister, effectively providing the military’s endorsement to the Kwantung Army’s actions. The Kwantung Army now became an occupation force in Manchuria, and its officers became heroes for all of Japan.

The Kwantung Army continued to seize Chinese territory, taking Rehe (Jehol) province in 1933 and Chahar province in 1934. Officers of the Kodo Ha movement were assigned to the Kwantung Army, strengthening its radicalism; among them was Hideki Tojo, who would become Japan’s prime minister during World War II.

In February 1936, the Kwantung Army showed its powerful influence when a group of Kodo Ha officers attempted a coup d’état in Tokyo. It failed, the ringleaders were shot, and the civilian leaders regained some control over the Kwantung Army.

Leaving Chinese unity under Chiang Kai-shek’s leadership, the Kwantung Army set to create an “incident” between Chinese and Japanese forces on July 7, 1937, at a railway junction near Beijing (Peking) in northern China, called the Marco Polo Bridge Incident. This led to the outbreak of the Sino-Japanese War, in which Japan committed unspeakable atrocities, such as the Rape of Nanjing. It became World War II in Asia. The Kwantung Army promised Tokyo victory in three months.

As World War II began and dragged on, the Kwantung Army remained in occupation of Manchuria, “Asia’s Ruhr,” against Soviet invasion. Over time, the army was stripped of most of its equipment and men, which were needed on other battlefronts.

Yet some of the Kwantung Army’s hotheaded leaders refused to surrender when Japan surrendered to the Allies on August 14, 1945. Commanding general Otozo Yamada refused to obey the Imperial Rescript to surrender, summoned his officers to his headquarters at Changchun, debated the news from Tokyo, and by a majority vote chose to go on fighting.

In the end, the Kwantung Army did obey an imperial command and surrendered to the Soviet Army. Several of its leaders, including Doihara and Tojo, were tried, convicted, and executed at the Tokyo International Court.

Email ThisBlogThis!Share to TwitterShare to FacebookShare to Pinterest
Labels: Japanese