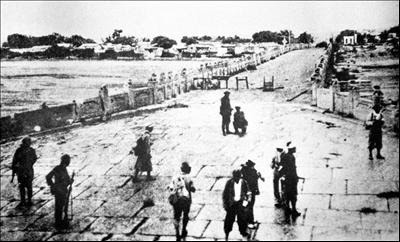 
Japanese called this the “China Incident” (“Shina jihen”). Shots were fired out of the dark at Japanese troops of the North China Garrison Army near the Lugouqiao-or Lugou, or Marco Polo-bridge over a tributary of the Hai River. It is not known who fi red at the Japanese. Speculation includes Chinese Communist provocateurs, Chinese Nationalist troops, or perhaps no one at all: it is possible local Japanese troops made up the incident from whole cloth. Japanese troops in the area were part of an international garrison based in the city by right of servitude under certain “unequal treaties” imposed on China many years earlier. They were allowed to maneuver under terms of the Boxer Protocol (1901), under which Japan kept troops in northern China. One Japanese private went missing for two hours, but otherwise no one was hurt. Imperial General Headquarters nonetheless determined to take advantage: an apology was demanded and the Chinese were instructed to withdraw from other key bridges, opening the road to potential conquest of Beijing and Hebei (Hopei) province. The Chinese garrison refused to move.

Japanese and Chinese troops clashed the next morning as a local squabble escalated into a Sino-Japanese crisis. The Japanese Army decided to follow the aggressive lead of its local commander and fight for full control of northern China. The initial Japanese attack was repulsed. China formally apologized in an effort to defuse the crisis. In private, Jiang Jieshi confided to his diary on July 8 that China would no longer accept humiliation at the hands of Japan, and moved to fully mobilize his forces. The mood among the Guandong Army regiments commanded by General Renya Mutaguchi was also bellicose, an attitude echoed throughout Imperial General Headquarters in Tokyo. Japanese leaders were aware of the Yezhovshchina blood purge of the Red Army then underway and thought that Moscow’s terrible distraction was Tokyo’s great opportunity. Guandong officers and others in the North China Garrison Army had long hoped for a pretext for war, and this incident provided it. Tokyo sent reinforcements to the Guandong Army from Korea and three fresh divisions arrived from Japan on July 25. Two days later the Japanese attacked in force. They quickly overran the ancient Marco Polo (Lugouqiao) bridge and surrounding territory. Thus began the Sino-Japanese War (1937-1945).

In one of a series of border incidents that marked the mid-1930s, Japanese and Chinese troops clashed at Marco Polo Bridge (Lugouqiao), about ten miles west of Beijing, during the night of 7 July 1937. There was nothing particularly unusual about the circumstances, not even that they led to a series of clashes around Beijing. Neither Nanjing nor Tokyo wanted a large-scale war, in spite of the creation of the Second United Front a few months earlier. But the Chinese were determined not to give up this important railway junction. While Japanese naval officers and diplomats feared that the Kanto- Army’s actions might threaten war with Russia, even the army did not foresee that they would snowball into a full-scale Japanese invasion and the beginning of World War II in Asia (known as the Anti- Japanese Resistance War in China).

How had this happened? At the beginning of July, Chinese troops around the Marco Polo Bridge decided to strengthen their defenses. On 7 July the Japanese conducted night maneuvers around the bridge, firing blank cartridges. The Chinese returned fire briefly, and no one was hurt. A missing Japanese soldier at roll call the next morning, however, prompted the Japanese to begin an attack (though the man returned after twenty minutes). The Chinese successfully repulsed the Japanese. Over the next few days feints and counter feints on the ground produced inflammatory statements from Tokyo and Nanjing: demands for apologies, complaints about insults, and references to sacred territories. On 17 July, Chiang Kai-shek declared:

China is a weak country, and if, unfortunately, we should reach the limit of our endurance, then there remains only one thing to do, namely, to throw the last ounce of our national energy into a struggle for the independent existence of our nation… If we allow one more inch of our territory to be lost, then we would be committing an unpardonable offense against our race.

By the end of the month, calculated feints had been replaced by continuous, fierce fighting, and the Beijing-Tianjin corridor had fallen to the Japanese. Japan’s massive invasion of China in the second half of 1937 was not thoroughly planned, but it was the logical result of an unstable situation. What Japan persisted in calling the “China incident” years into the Sino-Japanese War quickly turned into a quagmire. At first, events seemed to be falling Japan’s way. Japan’s best hope was that quick victories might pressure the Nanjing regime into accommodation with Japan. World opinion was sympathetic to China, but China was isolated. Yet the Nationalists would not surrender.

Posted by Mitch Williamson at 1:45 PM