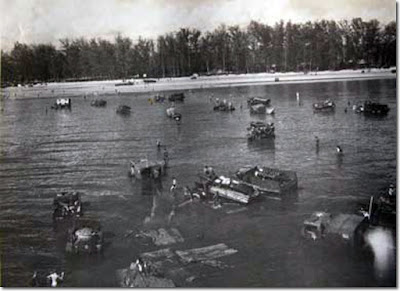 Despite no Japanese resistance, the landings themselves were a shambles. No account had been taken of tide conditions, or of the mangrove swamps. 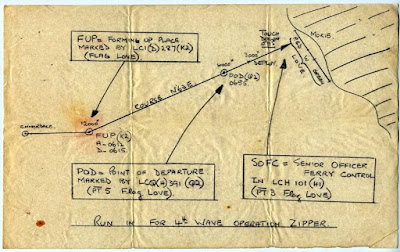 Operation Zipper was the plan for the capture of Port Swettenham on the north-west coast of Malaya leading to a southward advance on Singapore. The plan was devised by Admiral Lord Mountbatten's South-East Asia Command after receiving instructions on 3 February 1945 to complete the liberation of Burma as rapidly as possible and then liberating Malaya.

In this sweep "Zipper" concentrated on capturing a beachhead in the Port Swettenham/Port Dickson area of south-west Malaya. The opposition was found by Field marshal Count Hisaichi Terauchi's Southern region command, i.e. the 29th Japanese Army in Malaya under the command of General K. Doihara's 7th Area Army. "Zipper" faced two Japanese divisions and an Independent Mixed Brigade, supported by a tank battalion, in the Kra isthmus region.

The Allied Landing Force for "Zipper" was Lt.General O.L.Robert's XXXIV Indian Corps (5th, 23rd, 25th and 26th Indian Divisions, 3rd Commando Brigade and one Parachute Brigade of the British 6th Airborne Div.), and though "Zipper" itself was to use just two divisions and one brigade, the corps' additional forces were to be landed as soon as possible for the advance south towards Singapore.

D-day for Zipper was pushed to 9 September and would have landings near Morib with the 25th Indian Division and the 37th bde of the 23rd Indian Division. By D+6 they expected to have airfields near Port Swettenhamand Port Dickson.

By D+53 the advance to Singapore was to be well underway.

To support the landings more than 500 aircraft of strategic, tactical and general reconnaissance units of the RAF were assembled at airfields in Burma, Ceylon and the Cocos Islands. At the same time the supply of arms and equipment to the underground organisation in Malaya was intensified and photographic aircraft worked hard to provide advanced information for all three services. One of their tasks was to secure detailed pictures of the proposed landing areas, and most of this was done by a detachment of four Mosquitos from the Cocos Islands under the control of Wing Commander Newman of No. 684 Squadron.

The collapse of Japan eventually removed the urgency from "Zipper", but the operation was undertaken in advance of the original schedule as the best means of getting Allied troops back into Malaya.

On 9th September 1945 Major General G.N.Wood's 25th Indian Division and Major General D.C. Hawthorns's 23rd Indian Division each landed one Brigade (south of Port Swettenham and north of Port Dickson). The landings were extremely difficult as the beaches were far softer than expected, but the forces secured their objectives without undue difficulty as there was no opposition, and troops plus their equipment and vehicles began to come ashore in large numbers for the reoccupation of Malaya.

It was met by local resistance fighters who were members of, or had been trained by, Force 136.Some of these people had been taken by submarine from Japanese occupied Malaya and parachuted back after training and planning.Various equipments had also been parachuted to them.They were to sabotage communications and installations and attack Japanese positions at the time of our landings.It is a tribute to Force 136 that no detail of these plans reached the enemy.Malaya had been considered to be a place where the Japanese were most likely to resist, despite the surrender.They did not.Landed units were soon inland to Serembanand across the peninsula to the East Coast at Kuantan.A few days, later Singapore was re-occupied.