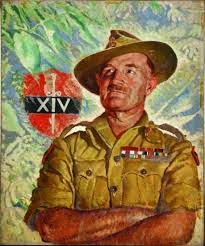 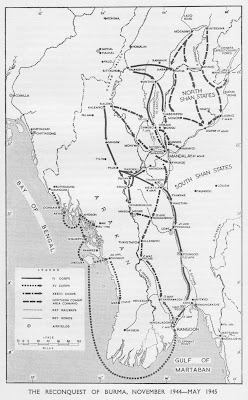 In March 1943, Lt. Gen. Kawabe Masakazu assumed command of the Japanese Fifteenth Army, and, in August, Burmese independence (under strict Japanese control) was proclaimed. For their part, in October, the Allies reorganized the CBI by forming the South-East Asia Command (SEAC) under Slim. A brilliant, resourceful, and aggressive commander, Slim planned what he hoped would be a comprehensive counteroffensive against the many Japanese advances. In Arakan, a long, narrow strip of land along the eastern coast of the Bay of Bengal in southern Burma, British Lt. Gen. Sir Alexander Frank Philip Christison would take XV Corps south against Akyab. Simultaneously, American Lt. Gen. Joseph A. “Vinegar Joe” Stilwell would lead U.S. and U.S.-trained Chinese forces (Northern Area Combat Command) in coordination with forces under Chiang Kai-shek to occupy Myitkyina, a northern Burmese stronghold of the Japanese. The objective of this advance, which would also be supported by Chindits under British commander Orde Wingate, was to allow the completion of the Ledo Road, an alternative supply route into China intended to replace the Burma Road, which the Japanese now controlled. Coordinated with these two operations was a third, on the Assam front in central Burma. The 17th and 20th Indian Divisions, commanded by Lt. Gen. Geoffrey Scoones, advanced on reconnaissance patrols deep into Japanese-held country.

The Japanese responded by creating a new army in Arakan, the Twenty-eighth, and, in northern Burma, the Thirty-third. Operation Ha-Go was launched in Arakan to surround the Allied forces there. It supplemented the Imphal Offensive, a plan to invade India from Burma. To the profound shock of the Japanese, however, both operations were defeated, the failure of the Imphal Offensive in March 1944 proving to be the worst defeat in Japanese military history to that time.

Just to the north of the Assam front, Stilwell led two Chinese divisions and the American volunteer rangers code named Galahad but better known as Merrill’s Marauders (see Frank Dow Merrill). Even as the Japanese were suffering defeat in their Imphal Offensive, in March 1944, Stilwell pushed them out of the Hukawng Valley. By hard persuasion, Stilwell managed to wring from the grasp of Chiang Kai-shek another five Chinese divisions, and he called on Wingate’s Chindits to disrupt Japanese communication to his south. After very bitter fighting, Stilwell secured the airfield at Myitkyina on May 17.

In January 1945, West African colonials attacked and captured Buthidaung, then overran a key Japanese communications center at Myohaung on January 25. The 25th Indian Division landed on the island of Akyab during this month, only to find that the Japanese had already withdrawn. This cleared the way for a steady Allied advance through Arakan, which was secured early in the year, thereby enabling the construction of airstrips to support an all-out assault on Rangoon.

The campaign to retake Rangoon was William Slim’s masterpiece. He deployed his forces with the aplomb of a magician thoroughly versed in the art of deception by misdirection. In mid-January, Slim sent the 19th Indian Division across the Irrawaddy River toward Mandalay, which it approached from the north. The 2nd British and 20th Indian Divisions, as well as the 7th Indian Division, crossed the river elsewhere during February, pulling off the longest opposed river crossing of the war, crossing points where the river’s width varied from 1,000 to 4,500 yards. While these crossings were being effected, the 20th Division suddenly veered southward and cut rail and road routes to Rangoon. Slim sent the 2nd Division eastward to approach Mandalay from the south, even as the 19th Division actually attacked and took it from the north on March 20, stunning the thoroughly confused Japanese defenders.

Yet Slim was also surprised. He had expected the Japanese, as usual, to make a suicidal stand rather than see Mandalay, full of symbolic as well as strategic import, fall. Instead, Lt. Gen. Kimura Hyotaro withdrew and regrouped. Slim responded deftly. He was not seduced by taking Mandalay. He understood that a truly decisive battle would have to destroy the Japanese presence, not merely take even so important a city. Therefore, Slim deployed south of Mandalay and fought Kimura at Meiktila, central Burma. The battle lasted four weeks, during February through March, and resulted in a Japanese defeat and withdrawal on March 28. This opened the way to Rangoon, except for a brief (and fierce) Japanese stand at Pyawbwe. By April 29, Slim’s 17th Division was on the edge of Pegu, just 50 miles from Rangoon. Heavy rains delayed the final push, and when the Anglo-Indian forces arrived in the capital, they were unopposed. The Japanese had pulled out.

During the summer, Japanese forces executed a long fighting retreat. The Japanese Twenty-eighth Army hammered fiercely against the British divisions arrayed along the Mandalay-Rangoon road, but because Japanese battle plans had been intercepted, the British were able to put themselves wherever the Japanese wanted to be, and the Twenty-eighth Army suffered some 17,000 casualties in the space of 10 July days, whereas the British lost just 95 men. It was almost certainly the most lopsided victory of the entire war.

After the Allies retook Rangoon, the Burma Campaign was essentially won, except that the Japanese continued to fight—fiercely, in the case of the Twenty-eighth Army, but more sporadically elsewhere. It was August 28, 1945, two weeks after Emperor Hirohito had broadcasted his surrender message to the people of Japan, before preliminary surrender documents were signed in Burma.

At the beginning of the Pacific war, the Japanese had taken Burma at comparatively slight cost: 2,000 dead in Burma, another 3,500 in Malaya. With this, the Japanese effectively began the dismantling of the British Empire, although they themselves were destined to lose their conquests by the summer of 1945.
Posted by Mitch Williamson at 2:36 AM

Email ThisBlogThis!Share to TwitterShare to FacebookShare to Pinterest
Labels: Strategy