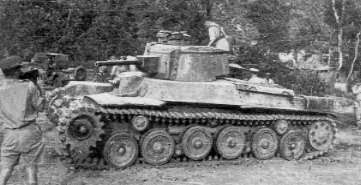 Burma saw the most extensive use of tanks outside the Central Pacific area. After the successful use of tanks in the 1943 Arakan fighting, British and Indian forces came to depend more and more heavily on tanks for close support of infantry. The only armor that the Japanese committed to Burma was the 14th Tank Regiment, which had remained since the 1942 campaign. It was so poorly equipped that its 4th Company used Stuart light tanks captured from the retreating British 7th Armoured Brigade in 1942. This Japanese unit was committed to the disastrous March 1944 Imphal campaign, by the end of which it had been reduced to only four tanks. This was also the first Japanese encounter with the Lee medium tank, a type that was obsolete by European standards but which proved very effective in British and Indian service in Burma. The 14th Tank Regiment, rebuilt near Mandalay, reentered the fray at Meiktila with the new Type 97-Kai Shinhoto Chi-Ha. In March 1945, its last tanks were wiped out on the Mandalay Road by Shermans of 255 Tank Brigade.

There were no great armored battles in the Pacific, in part because of the limiting factors of terrain and jungle. The Japanese did not activate their first tank divisions until summer 1942, and by the next year production and shipping problems at home caused them to abandon their plan for an armored army. All too aware of their weakness in tanks, the Japanese employed them in twos and threes in support of infantry, utilized them as mobile pillboxes, or simply dug them in as defensive artillery. Not until near the end of the war in China in 1944 did the Japanese utilize tanks in massed formations. Small numbers of tanks could often make a considerable difference, however, as in Burma.

The Japanese failure to appreciate the extent to which their opponents would employ tanks and be able to utilize them in areas where the Japanese assumed they could not operate also led the Japanese to ignore the development of antitank weapons. Their hasty improvisations included suicide bombers with explosive devices, crouched in small holes in routes over which Allied tanks would have to pass. This was hardly a successful answer to Allied armor. Throughout the war—in the Philippines, Burma, and on the Pacific Islands—the Japanese repeatedly found themselves engaging far greater numbers of superior Allied tanks.
Posted by Mitch Williamson at 8:40 PM

Email ThisBlogThis!Share to TwitterShare to FacebookShare to Pinterest
Labels: Japanese