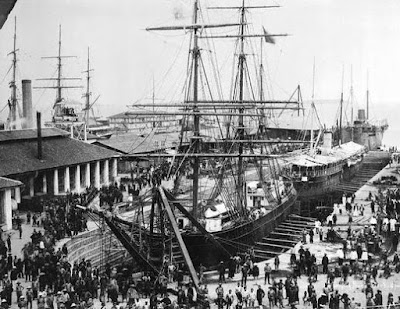 A busy Victoria Dock, Tanjong Pagar, in the 1890s. 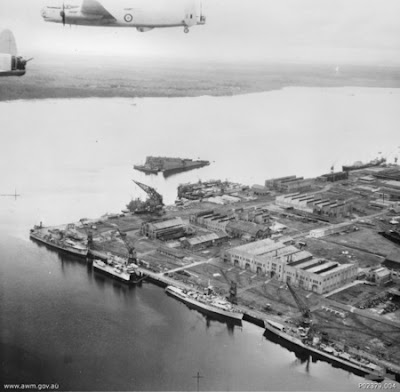 With the advent of steam shipping, Singapore’s advantages increased even further due to its location as a coaling depot. The expansion of steam-based commercial transport threatened to increase congestion and undermine trade, but this was averted with the development of the New Harbour (later known as Keppel Harbour), which began in earnest in the 1860s. Between 1860 and 1912, a number of companies competed against each other for contracts related to dock building and wharfing facilities. In 1912 the Singapore Harbour Board was reconstituted and the government began an extensive program of wharf accommodation and dock building.

The emergence of Singapore as the seventh largest port in the world in 1916 was a consequence of its strategic location as the hub of Southeast Asian steamship communication, lying as it did in the mainline shipping routes. Singapore’s trade, as well as the trade of the Straits Settlements, was divided almost entirely between European and Chinese merchants. The Europeans handled the trade centered at New Harbour, while the Chinese monopolized the trade of Singapore River. These two sectors of trade were carried on in two different languages, English in the foreign markets and Chinese in the bazaar.

Singapore’s trade flowed along two channels that may be called the east-west axis—that is, trade directed toward Europe involving the import of European manufactures and the export of Southeast Asian produce. In 1897 there were twenty European import-export firms engaged in the trade westward; the number had increased to sixty by 1908. These export-import firms took on the management of business enterprises, usually tin mines and rubber estates that were owned by companies located in Europe, England, and elsewhere. European merchants worked through Chinese intermediaries on two to three months’ credit. They bought from their Chinese connections the raw materials and foodstuffs for exportation to the West.

Chinese merchants were middlemen in a middleman’s economy. They stood between the European merchants who imported Western manufactures and the producers of Southeast Asia, who bartered their produce for the manufactures. The Chinese merchants distributed manufactured goods by adopting three modes of exchange. One method was to barter cotton piece goods; a second method was for the merchant to dispose of goods to agents in Southeast Asia. Finally, the Chinese merchant could sell directly to native consumers, and this was occasionally done in the Malay Peninsula. Here, a greater degree of enterprise was required; besides textiles, the merchant took along necessities.

The ability of the Chinese to trade directly and effectively in Southeast Asia was due to the fact that they had established connections in all these islands and that they had agents stationed in Sumatra, Borneo, and the Indonesian mainland. The Chinese were also able to command corresponding facilities, which were enjoyed by European firms in the trade westward. Shipping in particular gave the Chinese a big advantage—Chinese steamers shipped European manufactures or intra-Asian commodities, such as fish and rice, and brought the produce to be sold to the Europeans. The development of Chinese shipping was encouraged by legislation passed in the colony in 1852, whereby old Chinese residents could become naturalized British subjects. By the 1860s Chinese-owned vessels flying British colors plied the ports between Singapore, Siam, Cochin in China, and the archipelago.

European and Chinese merchants complemented each other’s’ activities. Europeans depended on the Chinese to dispose of their imports of manufactured goods and for a supply of exports of Southeast Asian produce. The Chinese depended on the Europeans for their credit facilities.

Euro-Asia trade constituted only one segment of Singapore’s trade. A second component was the intra- Asian trade that involved huge exchanges with Southeast Asia, rice and fish being the most important commodities. Here, too, British political control was an important factor in the expansion of the colony’s trade with the larger region. British control over Malaya had an appreciable effect on the trade of the Straits Settlements, whose merchants had substantial investment in tin and rubber, the natural resources of Malaya. Imports from and exports to Thailand were of equal value in 1870; imports increased thirteen times by 1915, exports increasing only by four and a half times. Thailand exported rice to Singapore and the Straits Settlements, while Malaysia exported rubber and tin.

Exports from Burma (Myanmar) were not appreciably significant; Burmese rice exports were diverted to the British and European market after the opening of the Suez Canal. The case of Borneo was different: Exports (rice, fish, cloth, opium, machinery, and railway materials) from Singapore made their way to Borneo, while the port received substantial imports of rattan, gambier, sago, gum, copra, coffee, and tobacco. Among the other items of Southeast Asian produce that entered Singapore’s trade, mention must be made of such Indonesian imports as pepper, rattan, gambier, and small amounts of rubber.

Between 1870 and 1915, the trade of the Straits Settlements had become one of trade in Southeast Asian produce. By the end of the period, Malaysia had become Singapore’s single most important trading partner, with tin and rubber figuring as the key imports. The phenomenal commercial expansion of the city was reflected in an impressive development of infrastructure related to expansion of dock facilities and civic amenities.

By the 1920s, Singapore became increasingly important in British perception as they began building a naval base in the city in 1923, partly in response to Japan’s increasing naval power. A costly and unpopular project, construction of the base proceeded slowly until the early 1930s, when Japan began moving into Manchuria and northern China. A major component of the base was completed in March 1938, when the King George VI Graving Dock was opened; more than 300 meters (984 feet) in length, it was the largest dry dock in the world at the time. The base, completed in 1941 and defended by artillery, searchlights, and the newly built Tengah Airfield, caused Singapore to be hailed in the press as the ‘‘Gibraltar of the East.’’ The floating dock, 275 meters (902 feet) long, was the third largest in the world and could hold sixty thousand workers. The base also contained dry docks, giant cranes, machine shops, and underground storage for water, fuel, and ammunition.

The outbreak of World War II did not affect most Singaporeans until the first half of 1941. The main pressure on the Straits Settlements was the need to produce more rubber and tin for the Allied war effort. However, by 1942, following sustained bombing by Japan, Singapore came under Japanese control. During the period of Japanese occupation from 1942 to 1945, Singapore remained a witness to Japanese aggression and brutality. The occupation produced a huge wave of anti-Japanese agitation in Singapore, particularly among the Chinese population, which had borne the brunt of the occupation in retribution for support given by Singaporean Chinese to mainland China in its struggle against Japan.

The Japanese surrender in 1945 did not immediately guarantee Singapore’s slow recovery to normalcy and prosperity. The end of the British Military Administration in March 1946 was followed by Singapore becoming a crown colony, while Penang and Malacca became part of the Malayan Union in 1946, and later the Federation of Malaya in 1948.

Postwar Singapore saw its merchants clamoring for a more active political role. Constitutional powers were initially vested in the governor, who had an advisory council of officials and nominated non-officials. This evolved into the separate Executive and Legislative Councils in July 1947. The governor retained firm control over the colony, but there was provision for the election of six members to the Legislative Council by popular vote. These developments were followed by Singapore’s first election on March 20, 1948.

The efforts of the Communist Party of Malaya take over Malaya and Singapore by force produced a state of emergency. The emergency that was declared in June 1948 lasted for twelve years. Towards the end of 1953, the British government appointed a commission under Sir George Rendel (1889–1979) to review Singapore’s constitutional position and make recommendations for change. The Rendel proposals were accepted by the government and served as the basis of a new constitution that gave Singapore a greater measure of self-government.

The 1955 election was the first political contest in Singapore’s history. David Marshall (1908–1995) became Singapore’s first chief minister on April 6, 1955, with a coalition government made up of his own labor front, the United Malays National Organization and the Malayan Chinese Association.

Marshall resigned on June 6, 1956, after the breakdown of constitutional talks in London on attaining full internal self-government. Lim Yew Hock (1914–1984), Marshall’s deputy and minister for labor became the chief minister. The March 1957 constitutional mission to London led by Lim Yew Hock was successful in negotiating the main terms of a new Singapore constitution. On May 28, 1958, the Constitutional Agreement was signed in London.

Self-government was attained in 1959. In May of that year Singapore’s first general election was held to choose fifty-one representatives to the first fully elected Legislative Assembly. The People’s Action Party (PAP) won forty-three seats, gleaning slightly more than 50 percent of the total vote. On June 3, the new constitution confirming Singapore as a self-governing state was brought into force by the proclamation of the governor, Sir William Goode, who became Singapore’s first yang di-pertuan negara (head of state) from 1959–1961. The first government of the state of Singapore was sworn in on June 5, with Lee Kuan Yew (1923– ) as Singapore’s first prime minister.

The PAP had come to power in a united front with the Communists to fight British colonialism. The contradictions within the alliance soon surfaced and led to a split in 1961, with pro-Communists subsequently forming a new political party, the Barisan Sosialis. The other main players in this drama were the Malayans, who in 1961 agreed to Singapore’s merger with Malaya as part of a larger federation. This federation was also to include the British territories in Borneo, with the British controlling the foreign affairs, defense, and internal security of Singapore.
Posted by Mitch Williamson at 8:38 PM