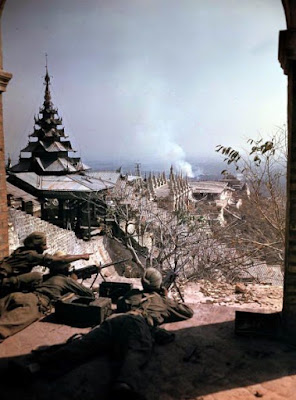 Machine gunners of the 19th Indian Division on Pagoda Hill 1945.

As the British XIVth Army burst onto the central plains of Burma, General William Slim assigned the 19th Indian Division the job of seizing the ancient capital of Mandalay. Looming 700 feet above the walled citadel was a pagoda-covered hill that the Japanese defenders fortified with concrete emplacements. The unenviable task of digging them out fell to the 2/Royal Berkshires and the 4/4 Gurkhas supported by Grant medium tanks of the 150th RAC. At the same time, an assault force from the 8/12 Frontier Force was formed to carry a breach created in the northern wall of Fort Dufferin by the direct fire of a 5.5-inch howitzer.

The 4/4 Gurkhas had taken the summit of Mandalay Hill, but in the subterranean chambers bored in the hillside the Japanese defenders survived and came out to snipe at the attackers who were waiting for them to emerge, thumbs ready to press the buttons of vigilant machine guns. It was the engineers who solved the problem, and in a particularly gruesome way. Under the surface of this hill, with its temples dedicated to an ideal of tranquility and non-violence, they burst open the concrete casings with explosive, poured petrol through the gaps and then fired Very lights into them. Anti-tank projectiles were used to blow down steel doors, through which petrol drums were rolled and exploded with grenades. This ghastly inferno was the key to victory. By 12 March, Mandalay Hill was clear. It would have been cleared earlier, the Indian Army Official History states, but 'Major-General Rees had decided not to bomb the sacred places, the pagodas, though [a] lot of machine-gun fire was poured on the garrison from the air. Rees had served in Mandalay as a young officer, and no doubt knew its importance as a religious centre. But the casuistical distinction between aerial bombardment and explosives igniting petrol drums is not easy to follow. Or perhaps the purpose was aesthetic rather than moral: when Compton Mackenzie toured Mandalay in 1947 in preparation for his Indian Army History, a Gurkha battalion commander explained to him the difficulties of removing the Japanese without destroying the hill, and, he commented, he could wish that 'the Americans had always been as scrupulous in Italy. ..I could not help contrasting the lot of Mandalay Hill with that of Cassino.

Fort Dufferin was next. 5.5 inch howitzers breached the walls, Thunderbolts bombed the bridge on the south side of the moat, 8/12 Frontier Force Regiment and 1/6 Gurkhas probed the approaches. But the Japanese reacted strongly. Their guns stopped the tanks accompanying the Gurkhas and the attack came to a halt. For several days the British guns continued to pound the walls, but the 50-foot earth ramparts behind them simply absorbed the shells.

Rees then decided to use a tactic remarkably similar to those of the Japanese ninja, the silent, invisible killers of samurai fiction. 'Exercise Duffy', as it was called, was meant to achieve a secret entry into the fort, to establish a foothold which could then be exploited. Rees was insistent that it was to be inexpensive in terms of casualties:
“The operation I intend is one of surprise; a silent start and rapid seizing of the bridgehead, NOT the forcing of an entry at all costs by bludgeon methods. If the surprise operation at reasonably light cost is not possible owing to enemy vigilance and preparations, then it will not be pressed home at all costs.”

The operation was entrusted to 1/15 Punjab and 8/12 Frontier Force of 64 Brigade (Flewett). They were to leave behind their steel helmets and change their boots for rubber-soled shoes. They would be brought to the walls in the darkness by engineers manning assault boats, with scaling ladders at the ready, and six man-pack flame-throwers and a machine-gun company would augment their firepower when the attack went in, which was at 10 pm on 17 March. They reached the north-east and north-west corners of the Fort in the darkness, but as they made for the breaches the guns had opened, the Japanese opened fire, sinking one of the boats. In the early hours of the 18th, a platoon which had a foothold on the railway bridge in the north-west corner (the railway ran right through the west side of the Fort) was met by automatic fire and driven back. The flame- throwers never got near enough to be of use. Realizing that any of his men caught on the walls by the morning light would be mercilessly shot down, Rees called off the attack at 3.30 am.

After the failure of 'Exercise Duffy', the battering began again. The RAF bombed the north wall, to little purpose, and 6-inch howitzers made seventeen more breaches in the north and east walls, on the theory that the Japanese could only man a small number of breaches and in the end would not be able to defend them all. B25s used skip-bombing with 2000lb bombs, the kind of thing that had been used against the Mohne Dam. The result was a 15-foot hole in the wall, and nothing more.3 Rees described for " the BBC, again, a typical day's assault on the Fort in the earlier phase -10 March-:

“Let's get under cover. The Frontier Force are attacking Mandalay Fort now. You can probably hear the noise of the shelling, mortaring, shooting. I'm fairly close to the walls myself, standing, looking half round a concrete wall. Our chaps are advancing steadily, bunching a little more than I'd like to see them. They're going very well. The tanks are advancing, firing very hard at the walls. You can see where our medium guns, firing direct, have made breaches in the walls of the fort. You can see the bullets flicking the ground just ahead of me. I think actually they're our own tank bullets. The tank Besa's co-axial firing just ahead of the infantry, smothering the operation. I can see one of our infantry running across now, just near the fort wall.

I'll get my glasses on.

I can see the breach, but there's a big moat, this side. I can now see some of our leading infantry. They've just doubled to behind a concrete shelter which the sappers have built before the war, because we're standing now in the sapper lines just north of Mandalay Fort, actually called Fort Dufferin, with a palace inside.

Tremendous lot of noise going on. A whole lot of smoke now, near the wall itself, which is a very good thing for our infantry. I'm not quite sure which of the firing is the enemy firing. I can see some of our infantry running round the tanks. Not always a wise thing to stand near a tank. Now I can see more of our infantry going across now, they're running across near the tanks, they're in slouch hats, Australian hats, Gurkha hats, very clear to see.

Rees's instructions from the Corps Commander to avoid unnecessary damage to Mandalay were proving increasingly difficult to observe. Slim was confident the Fort could be bypassed, and considered its capture to be a matter of news value rather than military advantage. Rees did not want a repetition of the stalemate at Myitkyina, and sought desperately for ways of substituting cunning for the bludgeon of artillery and air strikes. 'Duffy' had failed, but he remembered that, as the Governor of Burma's Military

Secretary in pre-war days, he had explored the Fort and discovered a culvert which went beneath the moat. He decided to find it again, and an assault unit was got ready to follow a Burmese who knew the plan of the Mandalay sewers. Sappers found that it was possible to approach the Fort from underneath, as they waded through the sewers, up to their thighs in mud.

It would have been a nauseatingly filthy attack. Happily, it was not necessary. In the early afternoon of 20 March, after yet another air-strike had taken place, four Anglo-Burmans - civilian prisoners held by the Japanese - carrying a white flag and a Union Jack came out of the north gate. Already harassed by the incursion of 17 Division into Central Burma, and not wishing to see the morale of his troops deteriorate, the GOC 15. Army, Katamura, relaxed his order to the defenders. 51 and 60 Infantry Regiments were ordered to put in a final attack on 19 Indian Division and then withdraw. The order was given on 18 March. 60 Regiment occupied the Government Farms Buildings area (called in the Japanese texts 'the Agricultural College') on the south edge of the city. During the night of 19 March, the main body of 15 Division withdrew from Mandalay. They were as well informed as Rees: they came out through a drain under the moat.

Slim was at Monywa when the news came through. Air Vice-Marshal Vincent at once detailed a Sentinel light plane from the L5 detachment of 194 Squadron, RAF, to fly him into Mandalay to take the salute at the victory parade, escorted by two Spitfires.

2 British Division got in on the act; but only just. Brigadier Michael West, of 5 Brigade, had been told to link up with his opposite number from 19 Division in Mandalay, and he drove up on 21 March, taking Colonel White, the Commanding Officer of the Dorsets, with him, a troop of Grant tanks, and some armoured carriers. There was no one at the crossroads rendezvous, except a puzzled military policeman, who sent them on to the Fort. They drove through the shambles of the city -White was oppressed by its air of desolation -past the ruins of King Thibaw's Palace, and on to the parade ground where they found 19 Division drawn up on the site of Government House, in the presence of Slim, Messervy, and three divisional commanders. 'It was perhaps most fitting', White wrote later, 'that the Dorsets gate-crashed this party to represent the 2nd Division, as we and the troop of the 3rd Dragoon Guards with us were the only troops of the Division to fight in Mandalay itself.' All the more appropriate since the Dorsets wore the battle honour ' Ava' for the Burma War of 1824-6, during which they had not entered Mandalay. By another odd coincidence, the fourth Marquis of Dufferin and Ava, who was with a Field Broadcasting Unit, was killed in an ambush between Ava and Fort Dufferin on 23 March.3 The flag was hoisted over Fort Dufferin, as soon as 72 Brigade went in, by Rees himself - according to Slim - or by a gunner of 134 Medium Regiment, Royal Artillery -according to the Official History. The ceremony was repeated by Slim at the formal parade to make sure everyone realized that more than one division had collaborated in the capture: 'The capture of Mandalay had been as much the result of operations at Meiktila and elsewhere as of those around the city itself. Every one of my divisions had played its part; it was an Army victory. I thought it would be good for everyone to have that fact demonstrated.'
Posted by Mitch Williamson at 2:55 AM