General Seishirō Itagaki signing the terms for the reoccupation of Singapore on board the heavy cruiser HMS Sussex. 4 September 1945. 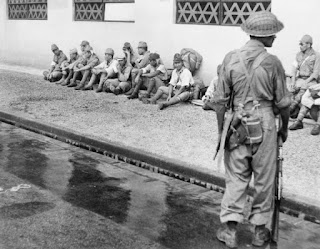 A soldier from the 5th Indian Division stands guard over Japanese prisoners.

On the same day that MacArthur witnessed the formal defeat of Japan and spoke eloquently on radio about the ending of a great tragedy (2 September), three minesweeping flotillas cleared the Straits of Malacca and Sir Arthur Power, the C-in-C of the BEIF, brought the first Allied warships back into Singaporean waters for over forty-two months. A couple of days later more ships and Allied troops arrived to witness the formal surrender on board the heavy cruiser Sussex by Lieutenant-General Seishiro Itagaki and Vice-Admiral Shigeru Fukudome of all Japanese forces in Singapore and Johor. Although Allied troops had gone ashore in Singapore after that ceremony had been completed on 4 September, the larger show of reclaiming the entire Malayan peninsula on behalf of the former colonial power still had to go on. Admiral Lord Louis Mountbatten, the Supreme Allied Commander, South East Asia Command (SACSEA), did not need any encouragement from London to orchestrate this rather contrived act of politico-military theatre. Despite the logistical and organisational problems associated with it, Operation Zipper was duly launched five days later on 9 September. In what became a three-day propaganda spectacle launched against an inactive foe, over 100,000 troops of the 23rd and 25th Indian Divisions were put ashore between Port Swettenham (Pelabuhan Kelang) and Port Dickson on the west coast of the peninsula covered by a force that contained two battleships, six escort carriers, four light cruisers and a Spitfire transport. Apart from giving the British media plenty of film and photographic opportunities, Zipper was designed to demonstrate to the local inhabitants that the colonial authorities hadn't forgotten them and had returned to liberate them from the yoke of Japanese oppression. Frankly, if the British thought that such an orchestrated enterprise was going to make up for the disasters of December 1941-February 1942, when they had been shown up in the most dramatic fashion, they were to be gravely disappointed. Zipper achieved a hollow victory since one could not help but sense that those left bereft earlier in the decade had reached the conclusion that their `freedom' had actually come about more as a result of the work of a group of atomic scientists than from anything the British military had been able to do to rescue them.

Operation Blacklist (the American occupation of Japan) had a far greater symbolic and material effect than Zipper was destined to have. Launched in early September, it too was stage-managed, but the principal difference was that it brought the Japanese people into contact with a conquering invader in their own homeland. It was unprecedented in this respect. Malaya and Singapore had not suffered from anything like the atomic devastation endured by the citizens of Hiroshima and Nagasaki. Furthermore, unlike the British who were returning to their colonial possessions, the Americans had no previous sovereign claims on Japan. A new page in the history of Japan was being written. Japanese subordination to a foreign power had become a reality. Adherence to the military precepts of nanshin (southward expansion), which had been executed with such daring panache by Admiral Isoroku Yamamoto at the outset of the Pacific war in 1941-42, had unintentionally led to a chilling, nationalistic dénouement three years later. Japan had been wrecked as a military power - such was the astonishing legacy of the attack on Pearl Harbor.


Posted by Mitch Williamson at 8:55 PM