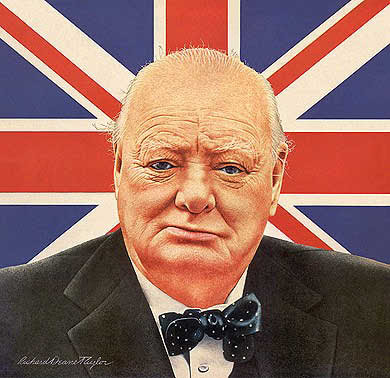 The conjoint battles of Mandalay and Meiktila raged through March. The 19th Division broke out of its bridgeheads, fought down the east bank of the Irrawaddy, and entered Mandalay on March 9. The Japanese resisted strongly. Mandalay Hill, 780 feet above the surrounding country, was taken in two days, but the massive walls of Fort Dufferin were impenetrable to ordinary missiles. Finally a breach was made with 2000-pound bombs, and on March 20 the enemy fled.

The rest of the XXXIIId Corps meanwhile fought on to Meiktila. They met great opposition, as the Japanese Commander-in-Chief, in spite of the intervention of the 17th Division behind his front, showed no signs as yet of withdrawing, and the armies were well matched. General Slim had six divisions and two armoured brigades, against over eight, under-strength, Japanese divisions and a division of the “Indian National Army.” But at the end of the month the enemy gave up the struggle and began to fall back down the main road to Toungoo and Rangoon, and through the mountains to the east. After many weeks of battle our supplies were badly strained, but the enemy’s must have been much worse. Long-sustained attacks by the Strategical Air Force on communications and rear installations and constant harrying of their retiring troops by the tactical air forces produced a crisis in their affairs.

There was also a crisis in our own affairs. The battles had lasted much longer than we expected. General Sultan was now halted on the Lashio road, and the advent of two Japanese divisions which had opposed him aggravated the delay. There was now no prospect of the Fourteenth Army reaching Rangoon by mid-April, and it was very doubtful if they could get there before the monsoon. Mountbatten accordingly decided to make an amphibious assault on the town after all. This would have to be much smaller than had been anticipated, and the attack on Puket Island would have to be cancelled. Even so the attack could not be launched before the first week in May, and by then it might be too late.

General Slim meanwhile resolved that the IVth Corps should pursue the enemy down the road and railway, while the XXXIIId Corps worked their way down the Irrawaddy. He was determined not only to reach Rangoon, but to draw a double net down Southern Burma and trap the enemy within it. The 7th and 20th Divisions accordingly drove down the river with overlapping thrusts and reached Prome on May 2. After a stiff fight with the remnants of three Japanese divisions at Pyawbe the advance went even more swiftly along the road and the railway. The troops were on half-rations to enable them to carry more petrol. An armoured column, and the mechanised brigades of the 5th and 17th Divisions, leapfrogging over each other, reached Toungoo on April 22. The airfields here were badly needed to further the air supply on which all depended, and also to bring the fighters of 221 Group R.A.F. within range of Rangoon. The next bound was to Pegu, whose capture would close the enemy’s southernmost escape route from Lower Burma. Our advanced troops reached it on April 29.

That afternoon torrential rain fell, heralding an early monsoon. Forward air-strips were out of action; tanks and vehicles could not move off the roads. The Japanese mustered every possible man to hold the town and the bridges over the river. On May 2 the 17th Division finally broke through, and, hoping to be first in Rangoon, prepared themselves to advance the few remaining miles.

But May 2 was also the D-Day of the amphibious assault. For two days beforehand Allied heavy bombers attacked the defences at Elephant Point, which barred the entrance to Rangoon River. On May 1 a parachute battalion dropped on the defenders and the channel was opened for minesweeping. Next day ships of the 26th Division, supported by 224 Group R.A.F., reached the river-mouth. A Mosquito aircraft flew over Rangoon and saw no signs of the enemy. The crew landed at a near-by airfield, walked into the city, and were greeted by a number of our prisoners of war. In the belief that an amphibious attack was no longer likely, the Japanese garrison had departed some days before to hold Pegu. That afternoon the monsoon broke in all its violence, and Rangoon fell with only a few hours to spare.

This amphibious force soon joined the 17th Division at Pegu and the 20th Division at Prome. Many thousands of Japanese were trapped, and during the next three months great numbers perished in attempts to escape eastward.

Thus ended the long struggle in Burma, but a tribute is due to those other Services without whose aid the struggles of the Army would have availed little. The Royal Navy had achieved undisputed command of the sea. They could, and did, convey the Army in safety wherever it was needed. The Allied Air Forces had utterly vanquished the Japanese planes, and their support had been unfailing. Airborne supply had been developed and maintained on a prodigious scale. Under General Snelling, the chief administrative officer of the Fourteenth Army, the supply services worked admirably. Last, but not least, the Engineers, both British and American, wrought many wonders of improvisation and achievement, such as laying nearly 3000 miles of pipe-line across river, forest, and mountain. The famous Fourteenth Army, under the masterly command of General Slim, fought valiantly, overcame all obstacles, and achieved the seemingly impossible. On May 9 I telegraphed to the Supreme Commander:

Prime Minister to Admiral Mountbatten (Southeast Asia) 9 May 45
I send you my most heartfelt congratulations upon the culminating victory at Rangoon of your Burma campaigns. The hard fighting at Imphal and Kohima in 1944 prepared the way for the brilliant operations, conducted over a vast range of territory, which have crowned the exertions of the Southeast Asia Command in 1945. When these matters were considered at Quebec last September it was thought both by your High Command and by the Combined Chiefs of Staff, reporting to the President and me, that about six British and British-Indian divisions, together with much shipping and landing vessels, all of which, and more, were asked for by you, would be required for enterprises less far-reaching than those you and your gallant forces and Allies have in fact accomplished. The prolongation of the German war made it impossible to send the British and British-Indian divisions which you needed, and a good many other units on which you were counting had to be retained in the decisive European theatre. In spite of this diminution and disappointment you and your men have done all and more than your directive required. Pray convey to everyone under your command or associated with you the sense of admiration and gratitude felt by all at home at the splendid close of the Burma campaign.
In honour of these great deeds of Southeast Asia Command His Majesty the King has commanded that a special decoration, the “Burma Star,” should be struck, and the ribbons will be flown out to you at the earliest moment.
Posted by Mitch Williamson at 2:57 AM