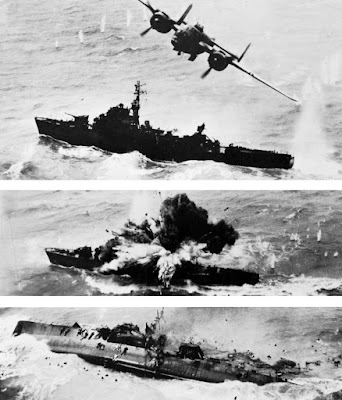 JAPANESE WARSHIP UNDER ATTACK by North American medium bomber
B-25 near Amoy, China, 6 April 1945; some enemy survivors can be seen in the
water as others cling to the side of the wreckage (bottom). In the spring of 1945
the Japanese began to withdraw from south and central China.

The majority of B-25s in American service were used in the Pacific. It fought on New Guinea, in Burma and in the island hopping campaign in the central Pacific. It was in the Pacific that the aircraft’s potential as a ground attack aircraft was discovered and developed. The jungle environment reduced the usefulness of standard level bombing, and made low level attack the best tactic. The ever-increasing amount of forward firing guns was a response to this, making the B-25 a formidable strafing aircraft.

In Burma the B-25 was often used to attack Japanese communication links, especially bridges in central Burma. It was also used to help supply the besieged troops at Imphal in 1944.
In the Pacific the B-25 proved itself to be a very capable anti-shipping weapon, sinking many of the ships being used to reinforce the Japanese position. Later in the Pacific war the distance between islands limited the usefulness of the B-25, although it was used against Guam and Tinian. It was also used against Japanese-occupied islands that had been bypassed by the main campaign, as happened in the Marshal Islands.

Posted by Mitch Williamson at 3:43 AM