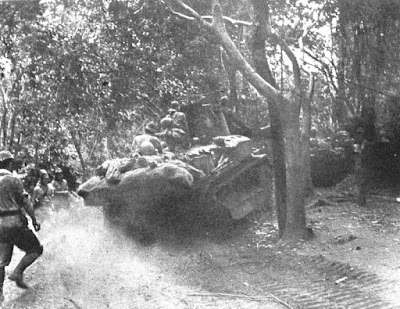 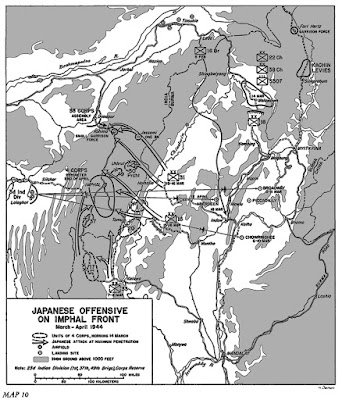 This was the key turning point in the Burma Campaign. Lieutenant General Mutaguchi Renya led his Fifteenth Japanese Army in a high-stakes attack from Burma into India, targeting the Allied supply bases at Imphal in Manipur. His immediate objective in this action was to preempt an offensive by William Slim’s Fourteenth British Army, but his longer-term goal was to gain a purchase for the Japanese-controlled Indian National Army and thereby incite a revolt against the British raj (colonial government) in India. Had the Imphal Offensive succeeded, the British might well have lost control of India, and with India lost, China would have been doomed. Mutaguchi knew that he was outnumbered and lacked air superiority. His only hope, he decided, was to achieve complete tactical surprise and to move with great speed. To even the odds as best he could, Mutaguchi preceded the offensive by ordering Lieutenant General Kawabe Masakazu to attack Arakan in February, thereby drawing off some of Slim’s reserves.

Mutaguchi formulated a plan intended to divide and dilute Slim’s forces. On March 7, his 33rd Division attacked from the south, pushing Slim’s 17th Division from its position at Tiddim and into a fighting retreat. Simultaneously, Mutaguchi’s Yamamoto Force attacked the 20th Division near Tamu but was checked at Shenam Saddle. The following week, Mutaguchi sent his 15th and 31st Divisions across the Chindwin River in an attempt to catch Slim in a pincers action and create a decisive double envelopment of his forces. This might well have worked, had it not been for the defeat of the earlier Japanese Arakan offensive. With this attack neutralized, Slim airlifted his 5th and 7th Divisions to Imphal beginning on March 19.

By this time, the main body of the Japanese advance was a mere 30 miles away. But this was not the only cliff-hanger of the campaign. Although Slim had anticipated that Kohima, just northwest of Imphal, would be attacked, he relied on the rugged terrain here to impede such an action. He calculated that the Japanese would be unable to deploy more than a single regiment in the attack. This proved to be a nearly catastrophic assessment as, astoundingly, Lieutenant General Sato Kotuku was able to field his entire 31st Division, which engaged the vastly outnumbered 50th Indian Parachute Brigade at Sangshak and took Kohima on April 3. On April 12, Mutaguchi’s 15th Division severed the road between Kohima and Imphal and positioned itself above Slim’s 4th Corps.

The achievements of both Sato and Mutaguchi were extraordinary and certainly exploited the element of surprise to the utmost; however, travel and battle over the hostile terrain took a terrible toll on the attackers, victorious though they were, and Mutaguchi’s men were simply too exhausted to press their hard-won advantages. In a counterattack that relied heavily on armor (against which the Japanese, lacking armor themselves, were powerless), Slim pushed back Mutaguchi but could not recover use of the Kohima-Imphal road. Therefore, Slim relied wholly on airlift to maintain supply of his now isolated forces. Desperate as this situation was, Slim knew that Mutaguchi was in an even tougher spot. Starved for supplies, Mutaguchi over-extended his forces in an attack on Dimapur. Slim checked this effort and forced Mutaguchi into a contest of attrition, which favored Slim. As the miserable monsoon encroached in May, Mutaguchi’s men, starving and assailed by tropical diseases, melted away. At last, on July 18, Mutaguchi withdrew back across the Chindwin River. Although Slim’s forces were subject to many of the same miseries, they were not in nearly as dire straits. Slim pursued the withdrawing Japanese and transformed the Japanese retreat into a rout. The result was disaster for the Japanese in Burma. Of 85,000 Japanese troops committed there, 53,000 became casualties. Some 30,000 were killed in combat, and thousands more died of disease and privation. Precious weapons and heavy equipment had to be abandoned. As for the Indian National Army, the reversal of the Imphal Offensive permanently removed it as a threat. Mutaguchi had gambled boldly and lost decisively.