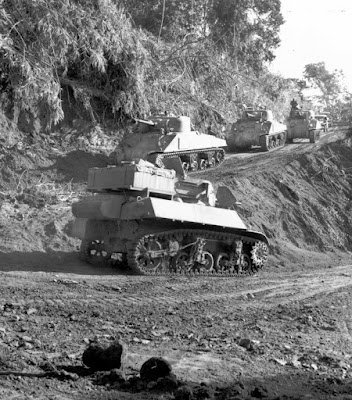 TANKS driven by American-trained Chinese soldiers making a sharp horseshoe turn on the road to Bhamo, December 1944. Tank in foreground is a light tank M3A3; in the background are M4A4 medium tanks. The Burma-India Campaign continued with intensity during the monsoon season of 1944. By December the projected route of the supply road to Bhamo had been cleared.

It consisted of six provisional tank battalions (no T/O&E stated) and entered Burma in January 1944 in support of the Chinese 22nd Division and Galahad Force (aka Merrill's Marauders). The Group was in China in March 1945 and in India in August 1945. The six tank battalions were phased into the Kuomintang Army by the end of the war.

The US Army contribution was a company sized unit of 9 officers and 222 enlisted men, primarily from the 527th Ordnance Company (Heavy Maintenance) (Tank). The organization had a joint US/Chinese command structure. The US personnel were primarily instructors, but with some limited combat duties.

The first two battalions were used in combat and the other four were essentially Chinese training units, all told about 1,800 Chinese soldiers.

The two combat battalions of the 1st PTG originally had about 100 -125 M3A3 light tanks. About 12 (or more?) M4A4 medium tanks were added in April 1944. These tanks were assigned to one platoon to each battalion and five M4A4 were used to form a US Medium tank platoon and it is obvious that Americans also crewed some of the M3A3 tanks. The 1st PTG also had 200 6x6 trucks, 50 1/4 ton trucks (jeeps) as well as 3/4 ton weapons carriers and command cars. As an Ordnance unit the 527th also had a well equipped maintenance shop.

LINK
Posted by Mitch Williamson at 4:03 AM

Email ThisBlogThis!Share to TwitterShare to FacebookShare to Pinterest
Labels: Chinese