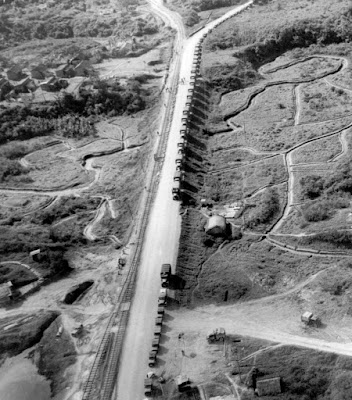 ASSEMBLY OF FIRST TRUCK CONVOY IN LEDO, Assam, to travel the Ledo- Burma Road, a route stretching over approximately 1,000 miles through Myitkyina, Burma, to Kunming, China. Note railroad to left of the road. The vehicles are loaded with supplies and ammunition; some are pulling antitank guns and filed artillery pieces.

In August 1942 a training center was established at Ramgarh, India, for training the poorly equipped Chinese troops; concurrently, training centers were also established in China. In December 1942 the Allies began the construction of a new road leading from Ledo, India, across northern Burma to an intersection with the Burma Road near the China border. Subsequently this was supplemented by a pipeline for aviation and fuel oil from Calcutta, India, to Kunming, China. Pending the reopening of ground communications with China, the only route of supply available was the air transport system over the spur of the Himalayas from the Assam valley, India, to Kunming, a distance of approximately 500 air miles.


The United States was primarily interested in building up China’s military strength, and Burma would be a chief route for these supplies to reach China; indeed, President Roosevelt saw China taking its rightful place as a major world power at war’s end. U.S. military planners also saw China as a potential location for heavy bombers to be used in the strategic bombing of Japan. These conflicting views were exacerbated by the personalities involved. Stilwell continued to feud with Jiang, and he also held that the British were more interested in defending their Asian empire than in fighting Japan. Stilwell wanted to recover Burma, and he worked hard to improve the fighting ability of those Chinese army units he could influence. The only way to get substantial military heavy equipment to China—which was essential if its fighting ability was to improve dramatically—was by way of Burma, and so construction of the so-called Ledo Road there became imperative. In the meantime, the United States undertook a massive logistical air supply operation to China from bases in India over “the Hump” of the Himalaya Mountains, the highest in the world. The ubiquitous C-47 (DC-3) aircraft was the workhorse for much of this campaign.

Construction of the 478-mile-long Ledo Road to connect the old Burma Road from Ledo, India, to Bhama, Burma, took 25 months. The new road ran through jungles, over mountains, and across 10 rivers. U.S. Army Brigadier General Lewis A. Pick had charge of this vast project, one of the major engineering accomplishments of the war.

Posted by Mitch Williamson at 3:52 AM

Email ThisBlogThis!Share to TwitterShare to FacebookShare to Pinterest
Labels: Logistics