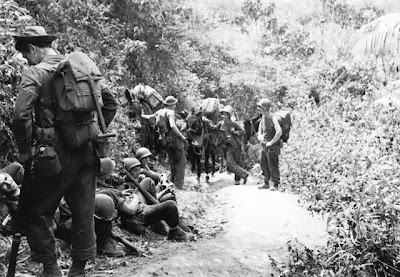 The march to Shaduzup and Inkawngatawng and the siege of Nhpum Ga had cost the Marauders 59 dead, 314 wounded, and 379 evacuated for wounds or illness. Of the original 3,000 men, only 1,400 were left, and those 1,400 were approaching a state of collapse. The Marauders anticipated a lengthy rest, but Stilwell had other ideas. The CBI chief received assurances from the British in April that the situation to the south was under control, but he was under pressure from the Joint Chiefs of Staff to seize Myitkyina as soon as possible. Thus in late April, as the Marauders read their mail, received new issues of clothing, relaxed from their labors, and looked forward to the long rest in the rear which they believed they had earned, “a grotesque rumor began to be heard, passed along in deprecating tones, pretty much as a joke.” The rumor proved true. Stilwell was forming a task force of the Marauders, two Chinese regiments, and some Kachin guerrillas to carry out a quick overland march to seize the airfield at Myitkyina. The American commander recognized the poor condition of GALAHAD, but he believed he had no alternative. He promised Merrill that he would evacuate GALAHAD without delay “if everything worked out as expected.”

Stilwell’s promise sustained the Marauders through the grueling 65-mile march over the 6,000-foot Kumon range to Myitkyina. Despite the efforts of an advance party of Kachins and coolies, the trail followed by the task force proved treacherous to negotiate. Mud transformed sections of the path into slides, and in places the Marauders had to cut steps out of the ground for their supply mules to obtain a foothold. Even so, a number of mules lost their footing and fell to their death. The smothering heat and humidity, the rugged terrain, and disease caused some Marauders to drop out of formation along the way. On 6 May advance patrols clashed with the Japanese garrison at Ritpong, leading GALAHAD’S commanders to worry that their task had been compromised. Nevertheless, the Marauders pressed on, finally reaching the vicinity of the airfield on 16 May.

Despite the concerns of the commanders, the attack on the airfield on the morning of 17 May caught the Japanese completely by surprise. While GALAHAD’S 3d Battalion feinted toward the northern end of the defenses and the 1st Battalion seized the Irrawaddy ferry terminal at Pamati on the right flank, a Chinese regiment overran the airstrip and probed toward Myitkyina itself. Lacking accurate intelligence on the defenders, this initial attack on the city fell into confusion and was easily repulsed. Nevertheless, exultation reigned at Stilwell’s headquarters when word arrived of the capture of the airfield. The general made arrangements to fly in Chinese reinforce ments and, exuberant over his success despite British skepticism, he wrote in his diary, “WILL THIS BURN UP THE LIMEYS!”

The jubilation over the capture of the airfield soon dissolved in the gloom of a siege. Houses and railroad cars around the city and roads that rose twelve feet above flooded rice paddies provided natural fortifications for the defenders, who may actually have outnumbered their besiegers. Fortunately for the Allies, the Japanese grossly overestimated the strength of their opponents and stayed on the defensive. To fill gaps in the Allied line, Stilwell and his staff scrambled to find whatever troops they could. Swallowing his pride, Stilwell requested help from the British 36th Division, only to be informed that no troops would be available for another two months at the earliest. Engineers and GALAHAD replacements went into the line, frequently without sufficient infantry training. The arrival of the monsoon and the lack of heavy weapons further slowed the operation. A series of attacks made little headway against the defenses, and by 2 June, the Allies had resigned themselves to a lengthy investment.

One Marauder later referred to the siege at Myitkyina as “our little Gallipoli.” Such static warfare, with its emphasis on fortifications and heavy weapons, ill-suited a light infantry unit like GALAHAD, which needed relief in any case. Some Marauders cut holes in the seat of their pants so that their dysentery would not interrupt the firing of their weapons. On the 2d Battalion’s front, soldiers fell asleep in their trenches from sheer exhaustion. Yet Stilwell was pressing worn units of other nationalities onto the front at Myitkyina as well, and even using the Chindits as line infantry. He could not relieve the only American combat troops in the theater without raising cries of favoritism. Thus GALAHAD fought on, with predictable results. By 25 May the Marauders were losing 75 to 100 men daily to malaria, dysentery, and scrub typhus. Merrill himself was evacuated after a second heart attack. Morale plummeted even further when desperate staff officers, trying to hold down the rate of evacuation, pressed into service sick or wounded troops who could still walk. Such episodes, along with the broken promises of relief, confirmed GALAHAD’S sense that it was the maltreated stepchild of higher headquarters. The resulting crisis in morale later created a nasty scandal in the United States.

Only a few of the original Marauders remained when Myitkyina finally fell in August. Bit by bit, the Allies, ever improving in combat experience and close air support, had tightened their grip on the Japanese defensive perimeter. By 17 June, GALAHAD had reached the Irrawaddy River north of Myitkyina, cutting off the enemy from supplies and reinforcement from that direction. Mogaung, a key rail center southwest of Myitkyina, fell to the Chinese and Chindits on 27 June, ending any threat to the siege from that direction. With the capture of Mogaung, Myitkyina’s fate was sealed. Sensing the doom of the city, the defenders evacuated their wounded on rafts, many of which were ambushed by Kachins as they drifted down the Irrawaddy. On 3 August the Chinese attacked, sending a raiding party to infiltrate enemy lines and create havoc in the rear while the 50th Division made the main assault. The Japanese soon gave way, and by late afternoon the Chinese had secured the city. Stilwell had his victory, but at a heavy price. The campaign had cost the Chinese about 4,200 casualties, and the Americans lost 2,200.

The fall of Myitkyina represented the greatest victory of Stilwell’s career, but within three months he had returned to the United States following a final quarrel with Chiang. Y Force had finally crossed the Salween into Burma in May, but any hope of a rapid Chinese advance toward Myitkyina soon evaporated when a Japanese counterattack drove Y Force back toward the frontier. China’s fortunes grew even darker in August when a Japanese offensive in east China threatened Chennault’s air bases. Chiang wanted to withdraw Y Force from Burma, but when Stilwell notified Washington of Chiang’s plans President Roosevelt, who had lost patience with the Chinese leader, warned that he expected Chiang to place Stilwell in command of all forces in China, strengthen Y Force, and press the Salween offensive. A petulant Chiang assumed that Stilwell had instigated this humiliating dispatch and demanded his recall. On 27 October 1944, Stilwell left the theater for the United States. His old domain was split into two parts. Maj. Gen. Albert C. Wedemeyer became Chiang’s new chief of staff and chief of the China theater; Lt. Gen. Daniel I. Sultan, an engineer officer and Stilwell’s CBI deputy, took over the India-Burma theater.
Posted by Mitch Williamson at 8:54 PM