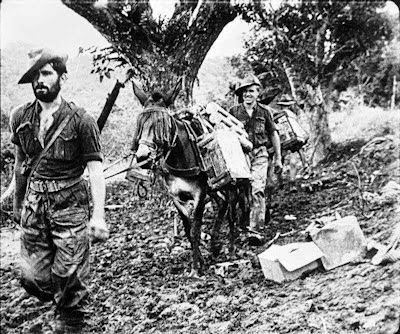 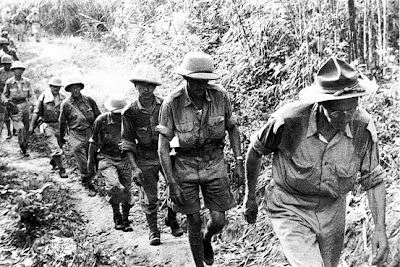 Orde Wingate was an artillery officer, but came to prominence by organizing the Jewish “Special Night Squads” in pre-war Palestine and then leading a guerrilla force against the Italians in Abyssinia. His passion and eccentricity made him both friends and enemies, but in March 1942 Wavell ordered him to India, and he evolved his Chindit concept (named for the mythical Burmese beast the chinthe) for long-range penetration behind Japanese lines. He came to Churchill’s attention after the first Chindit expedition, and he presented his ideas to Allied leaders in Quebec in 1943. On his return to India, he was allowed to increase his force to two divisions’ worth. Wingate was killed in an air crash in 1944.

EYEWITNESS Spring 1944
During the spring of 1944 the British, Gurkhas, and forces from China, East and West Africa, India, and the US fought the Japanese in India and Burma. The fighting was fierce and jungle warfare carried particular dangers, including heat, humidity, and tropical diseases. However, victories at Imphal and Kohima paved the way for the liberation of Burma in 1945.

“Every foot of progress had to be hacked out of trailing vines, creepers and spongy-leaved bushes. Giant teak trees, rising through the dense undergrowth, shut out the light. The column marched steadily and slowly through the dim twilight under a thick canopy of green. No sound broke the silence other than the patter of raindrops … Torrential rain fell periodically; mist swathed and swirled in the valleys and round the towering peaks. In the bottom of the valleys swollen streams raged unabated, the noise of which could be heard thousands of feet above.”

“The rain now fell steadily. The Deep sector looked like Passchendaele—blasted trees, feet and twisted hands sticking up out of the earth, bloody shirts, ammunition clips, holes half full of water, each containing two pale huge-eyed men, trying to keep their rifles out of the mud, and over all the heavy, sweet stench of death, from our own bodies and entrails … from Japanese corpses on the wire, or fastened, dead and rotting, in the trees. At night the rain hissed down in the total darkness, the trees ran with water and, beyond the devastation, the jungle dripped and crackled … With a crash of machine-guns and mortars the battle began. All night the Cameronians and the Japanese 53rd Division fought it out. Our machine guns ripped them from the new positions. Twice the Japanese forced into the barbed wire with Bangalore torpedoes [explosive charge at the end of a long piece of bamboo], and the blasting rain of the mortars wiped them out. At four a.m., when they launched their final assault to recover their bodies, we had defeated them …”

“The difficult we will do at once, the impossible will take a little longer.” POPULAR SAYING IN THE BRITISH 14TH ARMY IN BURMA
Posted by Mitch Williamson at 2:21 PM