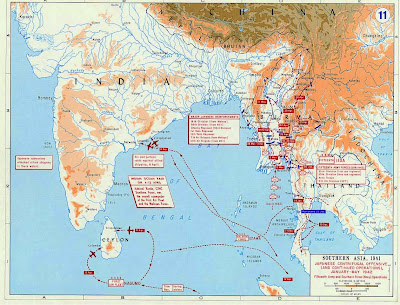 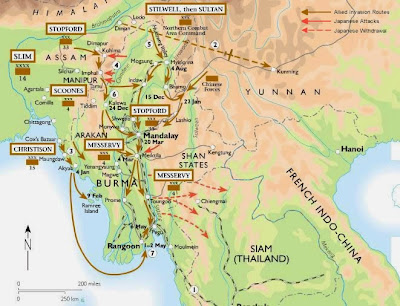 As part of Japan’s southern offensive in the aftermath of its 7 December 1941 attack on Pearl Harbor, its forces landed on the Kra isthmus and moved down Malaysia to take the great British naval base of Singapore. Thereafter, Japan repositioned forces used in the attack on Malaysia and moved into Burma to threaten the British in India. The location and topography of Burma helped determine that it would be a minor theater of action in World War II. As with much of Southeast Asia, the country features mountains and rivers running mostly north and south, and thus, it presented difficult topographical barriers for the Japanese forces advancing from east to west and for the British seeking to move from west to east. Terrain, climate, and disease remained formidable obstacles in the China-Burma-India Theater of War (CBI).

Despite these problems, the Japanese sought to secure Burma in order to cut the so-called Burma Road and further the isolation of China and to bring about an end to the Sino- Japanese War, as well as to stir up nationalist opposition to the British in India. The British government, meanwhile, wanted to keep China in the war and contain Japanese military forces sufficiently to the east to prevent them from encouraging Indian nationalist sentiment.

On 8 December 1941, Japanese Lieutenant General Iida Shōjirō sent the 33rd and 55th Divisions that comprised his Fifteenth Army into Thailand. Then, on 20 January 1942, Iida’s reinforced divisions, with air support, crossed into Burma, driving west toward Moulmein and Tavoy. The Japanese had some success in mobilizing Burmese nationalists (notably Aung San) to their cause, promising them independence from British rule. Some uprisings occurred against the British.

The British defenders, initially commanded by Lieutenant General Thomas Hutton, believed the difficult terrain would limit the Japanese to roads and cleared areas. The British suffered early and serious defeats because of this mistaken preconception. On 30–31 January 1942, the Japanese drove Hutton’s ill-equipped force—equivalent to two understrength divisions of British, Indian, and Burmese troops—from Moulmein, inflicting heavy casualties in the process. The faster-moving Japanese then forded the Salween River and outflanked the British left. In the 18–23 February Battle of the Sittang, they nearly surrounded Hutton’s entire force, destroying 12 British battalions and virtually all heavy equipment.

On 5 March 1942, Lieutenant General Sir Harold Alexander arrived in Rangoon and took command from Hutton but without markedly different results. Reinforcements from India restored British strength to two small divisions, but Alexander knew he could not hold back the Japanese, and on 7 March, after hard fighting, he abandoned Rangoon and vast storehouses of supplies to the advancing Japanese; Alexander himself barely evaded capture. The Japanese occupied Rangoon the next day.

At that point, the understrength Nationalist Chinese Fifth and Sixth Armies, nominally commanded by U.S. Lieutenant General Joseph Stilwell, entered northern Burma along the Burma Road to help the retreating British. The British held the right (southern) side of a rough defensive line across Burma; the two Chinese armies held the center and left. Major General William Slim, who arrived in Burma in mid-March, took command of the Burma Corps, as the British units were titled. Slim turned out to be one of the top field commanders of the war. However, the British continued to move along roads, and the Japanese continued to move through jungle trails and thus were able to outflank and defeat them.

General Iida made plans to attack first at Yenangyaung. He intended to occupy the Chinese Fifth Army, leave the Sixth Army to the east alone, and then mass against the Burma Corps at Yenangyaung to secure the oil fields there.

On 21 March 1942, the Japanese struck the Fifth Army at Toungoo, cutting off the entire Chinese 200th Division. Chinese counterattacks under Stilwell, supported by Slim’s British troops, allowed the 200th Division to fight its way free. Allied forces were slowly driven back, however. Although both Chinese armies at times fought well, they and the British did not cooperate effectively. Both sides were then reinforced, leading to a temporary pause in the fighting. The addition of part of the Chinese Fifty-Sixth Army permitted Stilwell to strengthen his defense of the Rangoon-Mandalay Railroad. Slim and Stilwell now laid plans for a counteroffensive, but Iida had also been reinforced, in the form of two additional divisions freed up by the surrender of Singapore.

General Slim continued to retreat under heavy Japanese pressure until he reached the Indian border and Imphal, with the Japanese pursuit halting at the Chindwin River. Meanwhile, the Chinese Sixth Army largely disintegrated under Japanese attacks, and other Chinese forces withdrew into Yunnan.

The rainy season beginning in May brought a welcome lull in operations for both sides. The Japanese now occupied four-fifths of Burma and needed time to organize their vast gains there and elsewhere, and the British wanted the respite to prepare a defense of eastern India. The cost of the fighting had been high, particularly for the British. A Japanese army of 50,000 men had beaten 40,000 British and Indian troops and inflicted on them some 30,000 casualties. The Japanese had also defeated 95,000 Nationalist Chinese troops, and only Major General Sun Li-jen’s 38th Division withdrew as a fighting unit. At the same time, the Japanese had suffered only some 7,000 casualties themselves.

Allied air support had been largely ineffective. Colonel Claire Chennault’s American Volunteer Group (AVG, the Flying Tigers) and Royal Air Force (RAF) fighters did what they could, claiming a high kill ratio against Japanese aircraft. But a surprise Japanese raid on Magwe on 21 March 1941 destroyed most British and American planes there and forced the RAF to withdraw to airfields in India. Although the RAF and Flying Tigers continued to try to assist the withdrawing Allied troops, ground-air communications were poor and the long distance from their airfields and thus the limited time over target rendered their efforts largely ineffective. The arrival of long-range Spitfires for the RAF helped somewhat. And in June 1942, with land resupply to China through Burma no longer possible, Stilwell, now commanding the China- Burma-India Theater, began aerial resupply by transport aircraft flying from airfields in north-eastern India to Kunming. The planes were forced to fly over the eastern Himalayas, known to the American pilots as “the Hump.”
Posted by Mitch Williamson at 12:27 AM