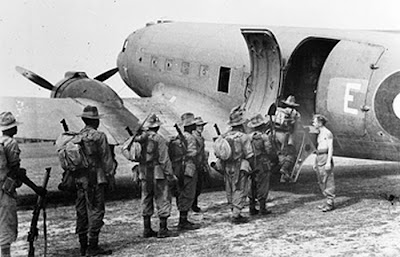 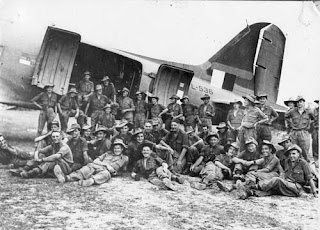 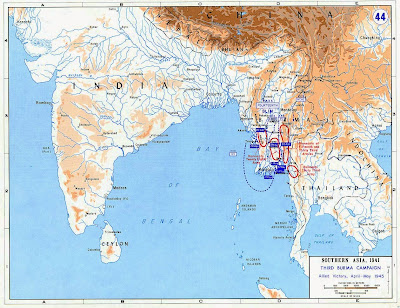 In October 1943, Vice Admiral Lord Louis Mountbatten had taken up his post as commander of the new South-East Asia Command, although command ambiguities remained. He and Slim agreed that British forces could not do much until the next dry season, although they were willing to organize some spoiling attacks to take pressure off a larger offensive sought by General Stilwell for his Chinese units. Wingate, now a major general and enjoying British Prime Minister Winston L. S. Churchill’s full support, planned a second and even more audacious raid for his Chindits that would include three brigades supported logistically by the U.S. Army Air Forces. The operation involved 25,000 men, of whom 3,000 were Americans. Led briefly by Brigadier General Frank Merrill, the U.S. force was known as Merrill’s Marauders.

The March 1944 raid began with high promise, but the whole venture was doomed from the start because its success rested on the active participation of Chinese divisions. These forces were being husbanded by Jiang Jieshi, who drove his chief of staff, Stilwell (also commanding all U.S. forces in the CBI), to distraction. In secret instructions to his generals, Jiang sharply limited Chinese military involvement, which in any case proved to be ineffectual. Another factor that contributed to the failure of the raid was the death of Wingate in a plane crash in India on 24 March, whereon Stilwell controlled operations. Wingate and Stilwell were much alike—both eccentric and dynamic—but they seldom disclosed their intentions, and as a result, there were serious failures in planning and staff work. Stilwell, in fact, disliked the British and did not use the Chindits effectively. Nor did he understand the difficulties facing guerrilla forces while dependent on aerial resupply but operating as conventional units.

The Japanese, heavily outnumbered in the air and lacking other modern weapons, fought back with considerable tenacity. Finally, the monsoon rains that began in mid-May slowed the offensive and brought more malaria. By June, the chief Allied enemies were not the Japanese but exhaustion, malnutrition, and disease. Although the raid inflicted 50,000 Japanese casualties against only 17,000 for the British, Allied forces were obliged to withdraw from Burma in July. Since it was ultimately unsuccessful, the 1944 Burma Campaign has remained a controversial subject. Unfortunately for all involved, it had no practical effect on the outcome of the war.

The lack of Chinese support in this operation displeased U.S. leaders, who had hoped that Nationalist armies would tie down the Japanese forces. Jiang, however, seemed more preoccupied with building up his own strength so that he could do battle with his domestic opposition, the Chinese Communists, after the war. Washington’s realization that it could not count on Jiang to fight the Japanese resulted in increased support for forces under Admiral Chester Nimitz in the central Pacific and General Douglas MacArthur in the southwest Pacific.

As the Japanese offensive ended, the Allies began their own offensive in October 1944, with the British largely in support of a Chinese attack. Stilwell employed five American-trained and American-equipped Chinese divisions to take Myitkyana. Opposing them was the Japanese Thirty-Third Army, composed of three depleted divisions commanded by Lieutenant General Honda Masaki. Stilwell hoped to be able to trap the Thirty-Third Army between the five divisions in Burma and the Y-Force in Yunnan. However, Stilwell’s poor relationship with Jiang and the situation in China after the Japanese attacked to remove the threat of U.S. strategic bombers there led Jiang to demand that Washington replace Stilwell. This change occurred on 18 October, with Stilwell succeeded by Lieutenant General Daniel Sultan. Jiang’s recall of two of the Chinese divisions from Burma to help stop the Japanese offensive in south China brought the Chinese offensive against the Japanese in Burma to a halt in December.

By fall 1944, the Allied position in Burma had improved considerably and the Japanese position had weakened, reflecting the relative fortunes of each side in the larger conflict. General Slim followed up his successful relief of Imphal, and in October, the British crossed the Chindwin River. The new Japanese commander in Burma, Lieutenant General Kimura Heitaro, had 10 divisions. He wanted to let the British advance in the center and outrun their supplies; then, he would counterattack to cut off and surround the British. This approach set the stage for the climactic battles of 1945.

In December 1944, the Allies assumed the offensive in the south (assisted by landing craft no longer needed for the invasions of France), in the center, and from China in the north. The southern advance required crossing many rivers and canals, and the going was naturally rather slow, although the Anglo-Indian forces regained the port of Akyab and Ramree Island as Kimura withdrew. Meanwhile, two Chinese divisions advanced into north Burma, reopened the Burma Road against negligible Japanese resistance, and seized Lashio in early March.

The chief battle took place in central Burma. Slim figured out Kimura’s plan, and with great fanfare, he dispatched forces to cross the Irrawaddy River while sending several divisions quietly to the south to outflank the Japanese, cut their line of communications and retreat, and possibly take the entire Japanese force defending central Burma. Advancing on a 140-mile front, the British captured Meiktila on 4 March. They took Mandalay two weeks later, while repulsing a simultaneous Japanese counterattack against Meiktila.

Slim sought to gain Rangoon while the roads and rice paddies were still sunbaked, dry, and hard. On 3 May, a combined amphibious, land, and airborne attack recaptured the capital city, and the fighting largely came to an end. Most Japanese troops fled to neighboring Thailand.