Detachment 101 of the Office of Strategic Services (OSS). 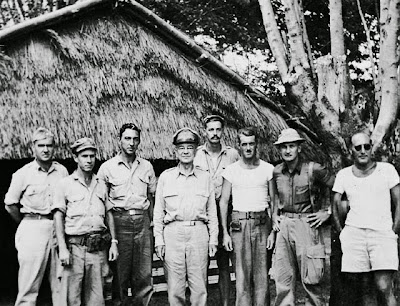 American officers of Detachment 101 with General Sultan at an advanced ranger base in Burma, June 1945. Colonel Peers, detachment commander, is third from left. 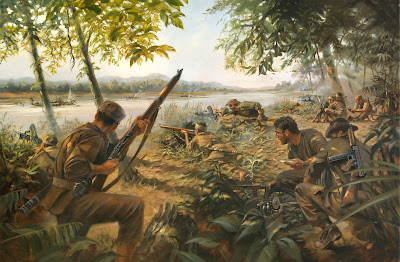 Formed in 1942, Detachment 101 supported Stilwell’s, and later Sultan’s, Northern Combat Area Command as an intelligence-gathering unit and as an organization for assisting in the return of downed Allied airmen to friendly lines. By the spring of 1945, however, Detachment 101, commanded by Col. William R. Peers, had organized a large partisan force behind enemy lines in northern and central Burma. Reaching a peak strength of over 10,000 native Burmese Kachin tribesmen and American volunteers, the detachment operated as mobile battalions screening the advance of British and Chinese forces moving on Mandalay and Lashio. Completely supported by air, they employed mainly hit-and-run tactics and avoided pitched battles against better trained troops.

Detachment 101 operations were scheduled to end after regular troops secured the Burma Road south of Lashio. Although the Kachin guerrillas, many hundreds of miles from home, were told that their work would be finished then and that they could return to their homes, when the time actually arrived, the situation had changed. The movement to China of the Chinese and American ground forces in Burma left the guerrillas as the only effective fighting force available to Sultan. Fifteen hundred Kachins volunteered to remain, and Peers was able to recruit an additional 1,500 Karen, Ghurka, Shan, Chinese, and a few Burmese volunteers. Dividing his 3,000-man partisan force into four battalions, he assigned operational sectors that extended from the Burma Road into southeast Burma for roughly 100 miles. Starting in April and extending into July 1945, Peers’ guerrilla units drove about 10,000 Japanese troops from this region. During that period all of the battalions saw heavy fighting. While most of the Japanese encountered were tired and poorly equipped, they habitually fought to the last man when pinned down. The partisans killed over 1,200 of the enemy at a cost of 300 of their own.

Overall, during Detachment 101’s tenure in Burma, its forces eliminated over 5,000 Japanese troops, assisted in rescuing over 300 downed Allied airmen, derailed 9 trains, blew up 56 bridges, destroyed 252 vehicles, and eliminated numerous dumps and other enemy installations. For Detachment 101’s superb performance, it was awarded a Presidential Unit Citation. However, it played only a minor supporting role in the final, but decisive battle between the British Fourteenth Army and the bulk of the Japanese Burma Area Army.
Posted by Mitch Williamson at 12:35 AM