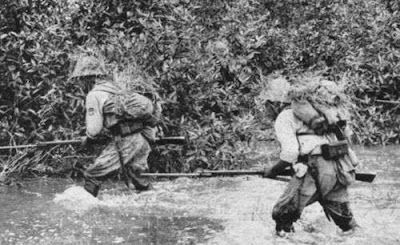 No amount of bravery could compensate for logistical impotence.

Because cutting off aid to Chiang Kai-shek had been one of the reasons for invading Southeast Asia, Imperial General Headquarters wanted to occupy Burma without delay. Reserve strength was unavailable for this operation, however, and it was necessary to defer it until the conclusion of the other thrusts. When the probable success of the Malay offensive became clear, on January 22, 1942, the high command ordered the Southern Army to proceed with the Burma campaign, although the end point of operations was not clarified. After the air bases in south Burma had been neutralized, the Fifteenth Army proceeded to defeat the Anglo-Indian forces near Rangoon on March 7; the Burmese capital fell next day. Further battles ensued in central Burma, culminating in an engagement on May 13 at which some twenty thousand British and Indian troops were crushed in the vicinity of Kalewa. The Fifteenth Army held up for the time being.

Some Imperial General Headquarters staff officers saw prospects for success in the Burma theater. The Japanese planners were thinking of seizing a corner of India, in the Imphal area, to establish a puppet government and undercut British authority. Considerable efforts had already been made to create collaborationist regimes in Burma under Ba Maw and a provisional Indian government under Chandra Bose. In March 1943 the Burma Area Army Headquarters under General Kawabe Masakazu was formed. The political nature of the envisaged Imphal operation became so apparent that some officers were rightly convinced that higher headquarters regarded the launching of the campaign a foregone conclusion rather than a carefully considered option. Whatever reservations Imperial General Headquarters entertained were assuaged by the self-confidence and enthusiasm of General Mutaguchi Renya, commander of the Fifteenth Army on the Burmese central front. The notion of a successful campaign in South Asia also undoubtedly appealed to the increasingly harried Tojo.

Allied counteractions had already begun on several Burmese fronts in early 1944. Chinese forces attacked in the north and northeast; Anglo-Indian troops, in central Burma and on the southern coast. The Thirty-third Army was established in April to deal with the Chinese, leaving Mutaguchi free for his offensive. His forces had already jumped off in early March. Making light of the enemy and almost ignoring logistics, Mutaguchi had been thinking in terms of a two week advance, but after initial progress, by early April the Japanese bogged down within sight of Imphal. Soon afterward, heavy monsoon rains began. Having lost half of its personnel en route to the front, the Fifteenth Army ran short of ammunition, supplies, and food. Demanding that the advance resume, Mutaguchi ordered the troops to devour their pack oxen and eat grass. His anger mounting, the general sacked two of his three division commanders, alleging that they lacked fighting spirit.

While the Anglo-Indian forces, excellently led by General William Slim, received aerial resupply and reinforcements, the Japanese units continued to disintegrate from sickness, hunger, lack of ammunition and antitank weapons, and inadequate air support. By late June the Allies had retaken Kohima and had cleared the road from Imphal. Mutaguchi, still dreaming of a decisive offensive, relieved the third of his division commanders, who defiantly broke off communications and retreated in order to save the last remnants of his division from destruction.

Japanese forces in Burma were smashed on every front. The Fifteenth Army lost over half of its 60,000 men in the disastrous retreat from the Chindwin River. Kawabe and Mutaguchi have been blamed for their inflexibility and unwillingness to withdraw and their reckless, emotional, and sophomoric conduct of operations. Imperial General Headquarters has also been censured for lack of resolution. Not until July 4 did it authorize suspension of the Imphal offensive, even though there had been no hope of success since May, when the rainy season had begun. Similarly, not until September 25 did the high command change the mission of the Burma Area Army from capture to interception of communications between China and India, a distinction that by then was academic. The Japanese were routed in Burma by the time they lost Rangoon in early May 1945. The entire Burma campaign of 1944-5, one of the worst debacles of the Pacific War, cost Kawabe more than 100,000 men
Posted by Mitch Williamson at 2:14 PM