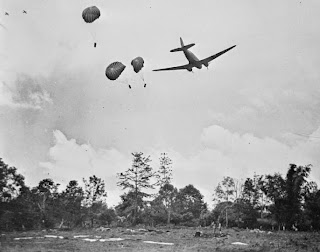 Supplies dropped by parachute. Supplies are parachuted from a Douglas C-47 of the Tenth US Army Air Force on the 10 December 1944. The C-47 was the workhorse of Allied air transport, and the war in Burma could scarcely have been won without it.

The year 1944 witnessed a major change of fortune in Burma. In March, the Japanese launched a major offensive designed to take them into India. It was repulsed after bitter fighting and the British 14th Army began a counter-offensive that would prove decisive.

Lord Louis Mountbatten became supreme Allied commander of the Southeast Asia Command in October 1943. He brought fresh purpose, while the British 14th Army, under General Bill Slim, had been undergoing rigorous training in jungle warfare. Mountbatten wanted to use amphibious operations to weaken the Japanese hold on Burma, but the priority of shipping lay with Europe and the Pacific, and there was virtually none to spare for Burma. Even so, the British had begun to advance again into the Arakan, Burma’s coastal region. Also, in north Burma, General Joseph Stilwell and his Chinese troops had begun their advance from Ledo, building a road as they went, to link up with the old Burma Road at Lashio. Mountbatten therefore agreed to mount a second Chindit expedition to tie down Japanese forces in the north and thus assist Stilwell’s advance.

Japan on the offensive
The Japanese also had plans. They were to attempt an invasion of India in the expectation that the Indians themselves would then rise against their colonial master. The main attack would be made in central Burma, but they would also mount a diversionary attack in the Arakan. This opened on February 6, 1944. However, instead of withdrawing as in the past, the British stood their ground and fought. Some elements were surrounded and were resupplied by air until they could be relieved and, after three weeks, the Japanese forces halted their attacks.

In the meantime, the first Chindit brigade had set off on foot and two more were flown into rough landing strips behind the Japanese lines in early March. The main Japanese offensive opened on the night of March 7/8. General Bill Slim had expected an attack, but not so early. His forces withdrew toward his main forward supply base at Imphal. Here, they resisted a succession of Japanese attacks. North of Imphal a crucial battle now developed at Kohima, the small hill village that guarded the road to Dinapur, the main railhead for supplies. The fighting, much of which was at close quarters, continued for two weeks until the British garrison could be relieved. The battle then continued, with the British gradually forcing the Japanese back. Meanwhile, the Chindits had been advancing north to link up with Stilwell, fighting some fierce actions as they did so.

Stilwell, too, was making good progress and, on May 11, Merrill’s Marauders, the US Chindit equivalent, took Myitkyina airfield, although the Japanese in the town proved too strong for them. Simultaneously, forces from China began to advance down the old Burma Road. Mogaung was captured by the Chindits at the end of June, but having spent months behind Japanese lines, the men were by now at their last gasp.

Japan on the defensive
The Japanese were also exhausted and had virtually run out of supplies. Hence, on July 11, they called off their offensive and began to withdraw, with Slim’s men following, to the Chindwin River. Three weeks later Stilwell finally secured Myitkyina, but by then the monsoon season had arrived, calling a halt to operations. Now forced onto the defensive, the Japanese drew up fresh plans. In the north they intended to prevent the link-up of the Ledo Road with the original Burma Road. In the center they planned to hold the British 14th Army on the Irrawaddy River, as well as stemming any advance west of the Irrawaddy to Rangoon.

While the advances in northern Burma continued, Slim began his offensive in early December with crossings of the Chindwin. Desperately short of supplies the Japanese were unwilling to give battle forward on their main defensive position on the Irrawaddy. Slim’s plan was to trap the Japanese in the loop of the Irrawaddy based on Meiktila. Given the lack of Japanese resistance between the Chindwin and Irrawaddy, however, he amended it. Now his intention was to make the Japanese believe that his next objective was Mandalay, when in fact it was Meiktila, a key communications center, which would also give him the ability to dash southwards to the ports of Rangoon or Moulmein. While this was happening, the advance down the Arakan continued, accompanied in January 1945 by a number of small amphibious operations designed to outflank the Japanese. 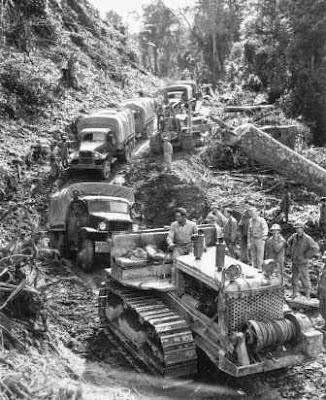 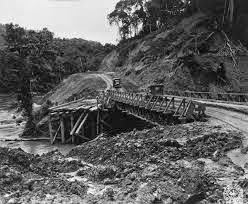 Building the Ledo Road. A triumph of engineering, the Ledo Road ran 465 miles (750 km) from Ledo to the old Burma Road. It took two years to construct, through some of the country’s most inhospitable terrain.

Burma liberated
In mid-January Slim’s troops established bridgeheads across the Irrawaddy north of Mandalay, and Japanese forces spent the rest of the month trying to destroy them, but without success. Meanwhile, in northern Burma a momentous event had occurred. On January 27 the forces advancing along the Ledo Road, under the command of General Stilwell, linked up with the Chinese troops that were advancing south, down the old Burma Road. Apart from mopping-up operations, the north of the country had now been liberated. Mid-February saw Slim’s troops cross the Irrawaddy opposite Meiktila. The latter fell at the start of March, the Japanese having been convinced that Mandalay was the main objective, as Slim had hoped. Realizing their mistake, Japan launched a series of counterattacks against the town. The battle for Mandalay was taking place at the same time. The Japanese resistance was bitter, but finally, on March 20, Fort Dufferin, the last bastion in the town, fell. A week later the Japanese ceased their attacks on Meiktila and began to withdraw. Slim’s sights were now set on Rangoon, some 300 miles (480 km) to the south.

The advance to Rangoon began on March 30. It followed the line of the Sittang River, brushing aside any Japanese opposition. The main concern was the approaching monsoon season. The Mango Rains, which preceded the monsoons, did arrive on April 20, but Slim’s men remained undeterred.

To ensure that Rangoon was quickly seized, paratroops dropped at the mouth of its estuary on May 1, and Indian troops made an amphibious landing the next day. They entered the Burmese capital on May 3, a day after the Japanese had evacuated. Three days later, these forces joined up with the troops advancing down the Sittang.

Japan’s predicament
The remnants of Japan’s forces were now in two groups. Those east of the Sittang had withdrawn to the Shan Hills on the border with Thailand, while what remained of the Twenty-Eighth Army was trapped west of the Sittang. Neither group was fit enough to withdraw to Malaya.
Posted by Mitch Williamson at 2:19 PM