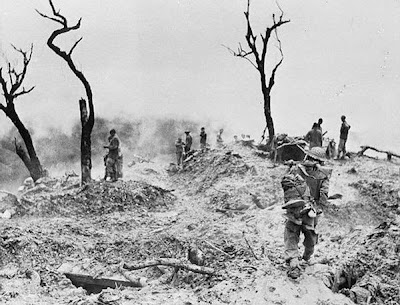 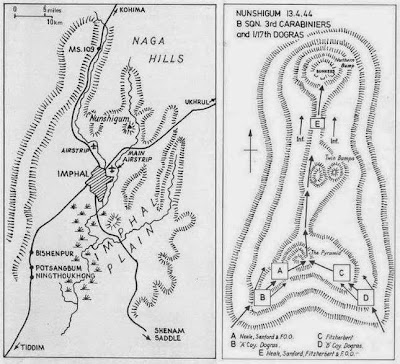 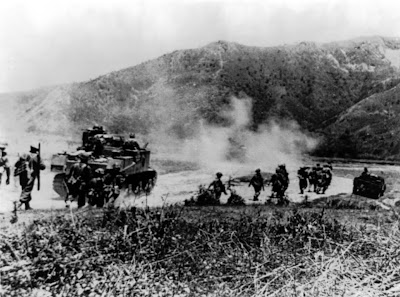 On 13 April 1944, the Indian 5th Division counterattacked at Nungshigum Hill outside of Imphal with support from artillery and M3 Lee tanks. The Japanese had neither anti-tank weapons nor artillery; these heavier guns had been decided against as Mutaguchi planned for a swift campaign, and these guns were simply too bulky to carry through the dense jungle. As a result, the hill was taken back by the Indian troops after dealing heavy casualties on the Japanese.

The Japanese 15th Division encircled Imphal from the north. Its 60th Regiment captured a British supply dump at Kanglatongbi on the main Imphal-Dimapur road a few miles north of Imphal, but the depot had been emptied of food and ammunition.

A battalion of the Japanese 51st Regiment under Colonel Kimio Omoto seized the vital Nungshigum Ridge, which overlooked the main airstrip at Imphal. This was a major threat to IV Corps, and on 13 April 5 Indian Division counter-attacked, supported by air strikes, massed artillery and the M3 Lee tanks of B Squadron of the 3rd Carabiniers. The Japanese had expected that the slopes were too steep for tanks to climb, and indeed Lee tanks had never been tried before on such gradients in action. The Japanese regiment had very few effective anti-tank weapons, and their troops were driven from the ridge with heavy casualties. The attackers also lost heavily; every officer of the Carabiniers and the attacking infantry (1st Bn, the 17th Dogra Regiment) was killed or wounded.

Early on the 13th April 1944 a heavy artillery barrage and attacks by dive bombers were laid down on the Japanese positions atop Nungshigum while Lee-Grant tanks of B Squadron, The Carabiniers (3rd Dragoon Guards) moved slowly up the ridge in support of a battalion of Dogras.

As the barrage lifted, the Japanese, apparently unscathed, emerged from their trenches full of fight. It was an extremely difficult operation because of the narrowness of the front-one tank’s width – along the ridge, and the determination of the enemy to hold on at all costs.

Whoever held the summit of Nungshigum held the key to Imphal, for it was only five miles to Scoones’ HQ in a village clearly visible to observers on the top. Here, in the largest, most comfortable house, the Corps Commander stayed calmly at his post, spending what spare time he could in the cultivation of orchids. Even closer lay the main all-weather airfield on a plain which, if captured or rendered useless by observed artillery fire, would gravely affect the vital air supply of 4 Corps and deprive the wounded of their chance of rapid evacuation to hospitals in India.

The Carabiniers did not fail, although they paid a terrible price for their victory. As the tanks cautiously edged their way up the ridge they came under increasingly heavy fire from resolute Japanese infantry who at first would not believe that tanks could be driven up this extremely steep hill. It was necessary for the tank commanders to stand up with open hatches in order to guide their drivers as they edged upwards. Japanese carrying explosives flung themselves repeatedly at the tanks, climbing onto the engine decks to kill the crews. Well before the Carabiniers got near the summit nearly all the tank commanders had been killed but without hesitation other crew members replaced them and the attack went ahead.

Squadron Sergeant Major Craddock took command when all the officers had been killed .He was closely backed up by Subedar Ranbir Singh of the Dogras; although neither had a word of the other’s language they conversed effectively in eloquent sign language as they swept onto Nungshigum and killed its defenders.

Ever since 13 April has been celebrated as Nungshigum Day by the Carabiniers’ successors, when B Squadron parades without officers, under command of the Squadron Sergeant-Major, to commemorate Craddock’s fine action.
Posted by Mitch Williamson at 2:31 AM