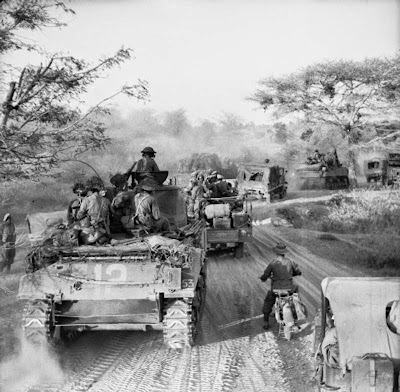 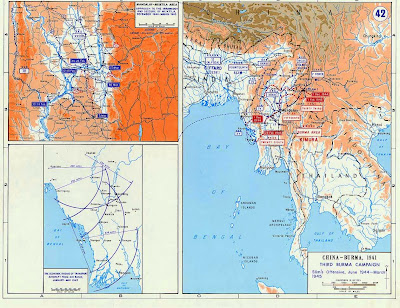 Beginning in late 1944 Mountbatten began his final offensive–Operation CAPITAL–to drive the Japanese from Burma. The crucial phase would be the difficult river crossing of the wide Irrawaddy. Detailed planning and command of this phase–Operation EXTENDED CAPITAL–was in the hands of the 14th Army under Lieutenant-General Slim.

As his army neared the Irrawaddy, Slim assumed–correctly–that the enemy would realize that his next move would be to cross the river. They would also station a light screen of garrisons and patrols–to act as a detection-tripwire– along their lengthy river-bank. Moreover they could–and would–deploy their main force as mobile reserves able to quickly descend on and destroy the British beachhead before it could consolidate. Nevertheless, Slim achieved a strategic surprise by his crossing on 13 February that so disrupted the Japanese strategy that they were forced into complete withdrawal from their generally favorable defensive positions along the river. He achieved surprise only because of a most successful, comprehensive deception plan.

Slim’s 14th Army deception plan was the key to surprise and victory. Knowing that the Japanese expected an offensive, expected it soon, and expected it to involve only a single main crossing at one point, Slim wisely concentrated his effort to mislead his enemy about the site of his real crossing at Nyaungu.

The 14th Army used the same sort of comprehensive, carefully coordinated deception operation first used by Montgomery at Alamein: camouflaged bases, covert deployments, counterfeit units, fake radio traffic, and a premature feint attack to draw the enemy’s reserves to the wrong end of the battle-line. Each unit, from corps to division, had its own part to play and was responsible for designing and carrying out its own deception operations synchronized and coordinated with the general plan. The key was CLOAK, the specific deception plan devised by IV Corps to mask its crossing.

The degree of surprise is measured by the fact that with approximate parity in unit strength–5 divisions in British 14th Army to 5 divisions in Japanese Burma Area Army–along the active portion of the Irrawaddy-front, the British were able to concentrate and move 2 divisions and 1 brigade across at a point where the Japanese mustered only a single understrength regiment.

This case is of special interest because it is the only one for which the actual text of a British deception plan (the IV Corps’ CLOAK plan) has been published.