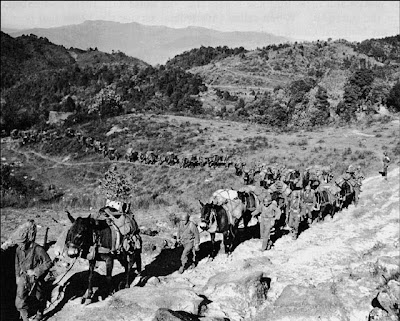 MULE SKINNERS AND PACK ANIMALS of the MARS Task Force plod through the hills toward the Burma Road, January 1945. 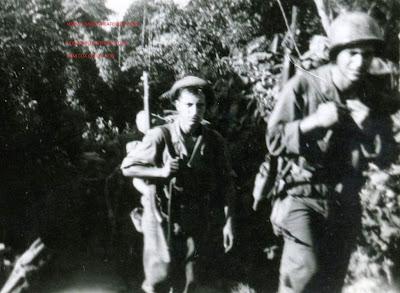 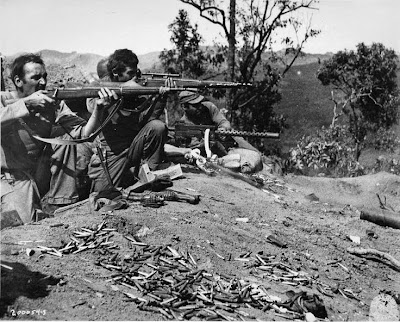 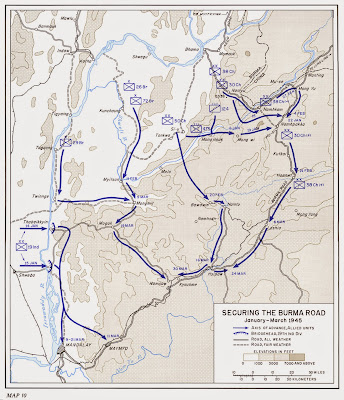 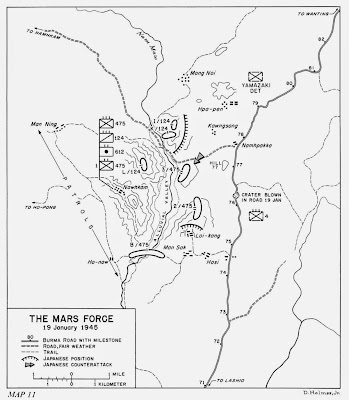 By late October 1944 it was clear that final Allied victory in Burma was only a matter of time. In June and July the British had decisively defeated the invading Japanese Fifteenth Army at Imphal, removing the threat to India and opening the way for a British counteroffensive into Burma. After Imphal the British IV and XXXIII Corps pushed to the Chindwin River, while the XV Corps prepared to advance down the Burmese coast: General Sultan could now call on one British and five Chinese divisions, as well as a new long-range penetration group known as the “Mars Task Force.” This brigade-size unit consisted of the 475th Infantry, containing the survivors of GALAHAD, and the recently dismounted 124th Cavalry of the Texas National Guard. The Allies possessed nearly complete command of the air. CBI’s logistics apparatus was well established, and the leading bulldozer on the Ledo Road had pushed to within eighty miles of the road from Myitkyina south to Bhamo. From that point the engineers needed only to improve existing routes to the old Burma Road, fifty miles south of Bhamo. Myitkyina had grown into a massive supply center with an expanded airfield and a pipeline. Sensing victory, the Allies planned to continue their advance in two phases, first to Bhamo and Katha, then to the Burma Road and Lashio.

The offensive resumed on 15 October. While the main British force to the southwest completed its push to the Chindwin, Sultan advanced three divisions toward the Katha-Bhamo line. To the west the British 36th Division, after overcoming stubborn Japanese resistance at the railway center of Pinwe, encountered no opposition until its occupation of Katha on 10 December. In the center the Chinese 22d Division likewise encountered little initial opposition, occupying its objective of Shwegu without incident on 7 November. South of Shwegu the 22d ran into advance elements of the 18th Division near Tonkwa on 8 December. Since the 22d Division was scheduled to leave the front for China, the 475th Infantry replaced the Chinese and held its ground against repeated assaults until the Japanese withdrew. Meanwhile, the Chinese 38th Division on the left flank had skillfully used flanking movements to drive the Japanese on its front into Bhamo. After a delaying action the Japanese evacuated Bhamo on 15 December and withdrew south toward Lashio.

Reaching the Burma Road now lay within the grasp of the Allied forces. The next phase of the campaign would involve a larger role for the Mars Task Force. General Sultan wanted to send the force up the line of the Shweli River to threaten the Burma Road and the rear of Japanese forces opposing the advance of the Chinese 38th and 30th Divisions from Bhamo. But the 124th Cavalry, many of whose troopers still wore the old high-top cavalry boots, first had to make the killing hike from Myitkyina south through the rugged mountains to the Shweli. Making their way along narrow paths which took them from deep valleys to peaks above the clouds, the men of the 124th finally reunited with the 475th at the small village of Mong Wi in early January 1945. From there the Mars Task Force moved east to drive the enemy from the hills overlooking the Burma Road. Bringing up artillery and mortars, the Americans opened fire on the highway and sent patrols to lay mines and ambush convoys. After the experience with GALAHAD, however, Sultan and the force’s commander, Brig. Gen. John P. Willey, were anxious not to risk the unit’s destruction by leaving it in an exposed position astride the road.

The Mars Task Force may not have actually cut the Burma Road, but its threat to the Japanese line of retreat did hasten the enemy’s withdrawal and the reopening of the road to China. While Y Force advanced southwest from the Chinese end of the Burma Road toward Wanting, the Chinese 30th and 38th Divisions moved southeast toward Namhkam, where they were to turn northeast and move toward a linkup with the road at Mong Yu. To oppose this drive, the Japanese had deployed the 56th Division at Wanting, troops of the 49th Division at Mong Yu, and a detachment at Namhkam, but these units planned to fight only a delaying action before retreating south to join the defense of Mandalay. They withdrew as soon as the Chinese applied pressure. As the Marsmen were establishing their position to the south, the 30th and 38th Divisions captured Namhkam and drove toward Mong Yu. On 20 January advance patrols of the 38th linked up with those of Y Force outside Mong Yu. Another week proved necessary to clear the trace of any threat from Japanese patrols and artillery fire, but on 28 January the first convoy from Ledo passed through on its way to Kunming, China. In honor of the man who had single-mindedly pursued this goal for so long, the Allies named the route the Stilwell Road.
Analysis
Historians have found it fashionable to characterize the CBI as a forgotten theater, low in the Allied list of priorities. To be sure, the European, Mediterranean, and Pacific theaters all enjoyed greater access to scarce manpower and material than the CBI, which had to cope with an extended line of supply back to the United States. Only a few American combat troops served in China, Burma, or India. Yet one can hardly call the CBI an ignored theater. It occupied a prominent place in Allied councils, as Americans sought an early Allied commitment to reopening China’s lifeline so that China could tie down massive numbers of Japanese troops and serve as a base for air, naval, and eventually amphibious operations against the Japanese home islands. The American media, with its romantic fascination with China and the Burma Road, followed the campaigns closely and kept its audience informed on Vinegar Joe Stilwell and Merrill’s Marauders. Interest in the theater did drop after early 1944 as estimates of China’s military capability declined, but Allied leaders continued to keep a close eye on developments in a region where they still felt they had much at stake.

For the American supply services, their performance in the CBI theater represented one of their finest hours. The tremendous distances, the difficult terrain, the inefficiencies in transport, and the complications of Indian politics presented formidable obstacles to efficient logistics. Nevertheless, by early 1944, American logisticians had developed an efficient supply system whose biggest problem was the time needed to ship material from the United States. The supply services expanded the port capacity of Karachi and Calcutta, enhanced the performance of India’s antiquated railroad system through improved maintenance and scheduling, and developed techniques of air supply to support Chinese and American forces in the rugged terrain of North Burma. Despite the skepticism of the British and other observers, American engineers overcame the rugged mountains and rain forests of North Burma to complete the Stilwell Road which, joined to the old Burma Road, reopened the line to China. A tremendous feat of engineering, the Stilwell Road deservedly earned considerable applause.

Stilwell himself has received more mixed reviews. A fine tactician, he maneuvered his Chinese-American forces with considerable skill in the campaign to drive the Japanese from the Hukawng Valley, and he showed commendable boldness in the decision to strike for Myitkyina before the monsoon. In the end the gamble barely paid off, but it did succeed. Stilwell’s record indicates that he would have likely performed quite well as a division commander in Europe, the role that Army Chief of Staff General George C. Marshall had in mind for him before his appointment to the CBI theater. Unfortunately, most of Stilwell’s responsibilities at the CBI emphasized administration and diplomacy, areas for which he possessed much less aptitude than for field command. He had little patience for paperwork, and he lacked the tact to reconcile the differing viewpoints of the nations involved in the CBI. Admittedly, in his three years in the theater, he probably held more concurrent positions than should ever have devolved on one man.

In Stilwell’s record, though, perhaps no aspect has stirred greater controversy than his treatment of GALAHAD. After the Myitkyina campaign numerous reports appeared in the American media about a breakdown of morale in the unit. Marauders complained that theater headquarters seemed to view them as expendable, bastard stepchildren, not worthy of medals or promotions. Many also protested that recruiters had told them that GALAHAD would serve for only ninety days of combat before returning to the rear for rest and rehabilitation. It seems clear that Stilwell and his staff could have done more to make the Marauders feel welcome in the theater, whether through decorations or some other means of recognition. Here Stilwell’s personality played a key role. As a man who viewed himself as a regular doughboy, he looked with displeasure on individuals who seemed to demand more than their fair share of attention. When Hunter asked Merrill why GALAHAD was not receiving more medals, Merrill replied, “Well, the boss is kind of funny about those things.” Yet before criticizing Stilwell too harshly, one should take into consideration the importance he placed on reaching Myitkyina before the monsoon, GALAHAD’S status as his one reliable unit, and his inability to relieve that unit while other equally exhausted nationalities continued to fight.

In the end, how valuable were Myitkyina and the Burma Road? The capture of the city and the reopening of the highway certainly made possible a vast expansion of the supply effort for China. By January 1945, however, few American leaders cherished any illusions about a major Chinese contribution to the defeat of Japan. In eight months the Japanese would surrender, but any American hopes that China would become a benign, democratic great power were soon dashed by the victory of the Communists over Chiang’s American-equipped army in the Chinese revolution. Thus the reopening of the Burma Road had little effect on the eventual outcome of the war and even less on its aftermath. Nevertheless, as a story of human endurance under some of the worst conditions to face soldiers in wartime, it holds a special place in the annals of World War II and American military history.
Posted by Mitch Williamson at 8:51 PM