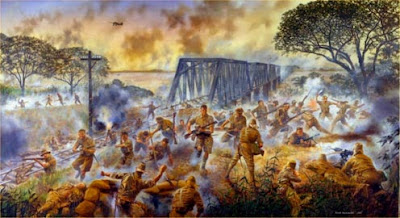 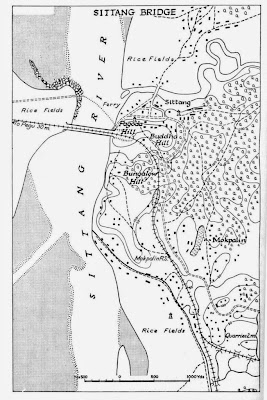 The 16th Brigade of Major General John Smyth’s 17th Indian Division (with few experienced officers, a high number of recruits, and new weapons on which they had not yet trained) absorbed the Japanese attack, lost most of its transport, and fell back. None of the division’s three Indian brigades had trained at brigade level, nor had the division trained as a division. Tactically, the British would have been better off to have concentrated their men, but strategically they needed to engage the Japanese as far forward as possible so as to gain time. Strategy took precedence over tactics.

The Japanese seized the first major town, Moulmain, east of Rangoon across the Gulf of Martaban, on January 30–31, 1942. It was a hard and costly fight for the Japanese. The 2d Burma Brigade of the 1st Burma Division defended the town, inflicted numerous casualties on the Japanese, and then spirited away 75 percent of its men by river steamers as the Japanese entered. The 17th Indian Division then deployed to hold the Salween River (95 miles due east of Rangoon), but the long river had many crossing points. The Japanese crossed on February 9. Gurkha counterattacks broke up the first roadblock the Japanese established, but additional crossings soon had the two Japanese divisions across the river. The 17th Indian Division, fighting without antitank guns and field artillery, withdrew.

The first major fight, however, would take place at the Bilin River, 75 miles northeast of Rangoon. Once again, however, the river was fordable almost everywhere. The Japanese were marching cross-country so swiftly that their lead elements got across the Bilin before the motorized British could set up behind the river! British counterattacks on February 17 failed to budge the Japanese. More Japanese crossed on February 18 despite British counterattacks. The British decided to withdraw.

The 17th Indian Division broke contact and moved 17 miles to the large Sittang River, 65 miles northeast of Rangoon, a city normally holding a half million people. Withdrawing to the Sittang meant that the line of communications to China would be cut, for the road and railroad north out of Rangoon would come under Japanese artillery fire. Rangoon’s air defenders would have to withdraw west into eastern India, for air warning would be too short to continue to use the field.

The 17th Division began to funnel its transport across the single-lane bridge over the broad, unfordable Sittang the night of February 21–22, 1942, but a vehicle jammed on the bridge and delayed movement. The Japanese had in the meantime been engaged in a heroic cross-country foot march that lasted fifty-six hours and placed them near the Sittang. On the morning of February 22, Japanese forces attacked the east bank defenses out of the northeast. Additional attacks continued into the night.

Although the Indian troops were holding, confusion was so great that the soldiers in charge of bridge demolition believed most of the division had crossed the river, Fearful of losing the bridge to the Japanese, the demolition party on the west bank blew the bridge at 0530 hours on February 23. Loss of the bridge trapped most of the 17th Division on the east bank. The 17th Division troops abandoned their equipment and weapons and swam or rafted across the mile-wide river.

The situation stabilized for the moment. The Japanese had learned that British reinforcements continued to arrive at Rangoon’s port and that Chinese armies were moving south into Burma. Speed was important, but so were supplies and river-crossing equipment. Their attack into Burma had been accomplished without a supply line. Everything they used had been carried or captured. Fifteenth Army now had to reestablish contact with its base.

Posted by Mitch Williamson at 12:32 AM