The Hump Honey out of Cheng-tu China.

The Lady Boomerang out of Paindota India, July 1944. 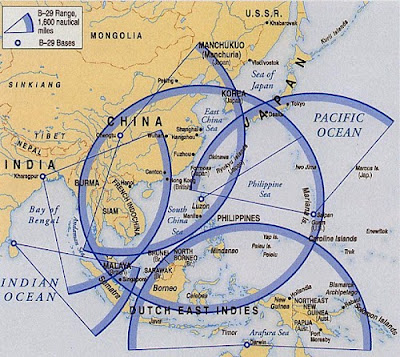 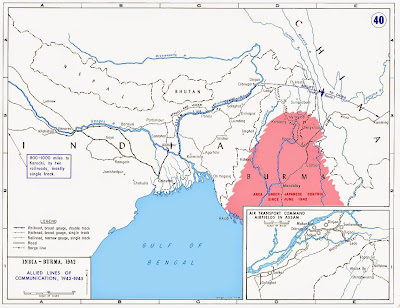 The decision to mount the invasion of Japan from island bases without benefit of a lodgment on the east China coast meant that the war would end, as it had been waged throughout, with no real connection between the Pacific theaters and China-Burma-India. In the latter theater problems of strategy and command had been even more difficult of solution than in the Pacific, being rooted in the divergent interests of the three Allied nations and made bitter by the personal animosities of some leaders. China-Burma-India, lying at the extreme end of the supply line from America, was accorded a very low priority, and geographical factors within the theater made it difficult to use the bulk of the resources in combat: most of the tonnage available was spent merely in getting munitions to the various fronts. There were few U.S. ground forces in CBI, most of the troops being air or service forces whose mission was to see that a line of communication was preserved whereby China could be kept in the war.

The Tenth Air Force, having earlier protected the southern end of the Assam-Kunming air route that was long the only connection between China and U.S. supply bases in India, was committed in mid- 1944 to a campaign in northern Burma whose dual objective was to open a trace for the Led0 Road into China and to secure bases for a more economical air route over the Hump. By that time Allied air forces, combined in the Eastern Air Command, had control of the skies over Burma; they helped isolate the strategic town of Myitkyina, supplied by airlift the ground forces conducting the siege, and rendered close support in the protracted battle that dragged on from May to August. After the fall of Myitkyina, the Tenth Air Force participated in the drive southward to Rangoon, a campaign that would seem to have borne little relation to the primary American mission. In both air support and air supply the Tenth showed skill and flexibility, but these operations absorbed resources that might have accomplished more significant results in China. After the Burma campaign EAC was dissolved in belated recognition of differing interests of the Americans and British, and at the end of the war the Tenth was moving into China to unite with the Fourteenth Air Force.

That force, ably commanded by Maj. Gen. Claire E. Chennault, had developed tactics so effective that its planes had been able to support Chinese ground forces and strike at shipping through advanced bases in east China while giving protection to the northern end of the Hump route. Chennault believed that if his force and the airlift upon which it depended could be built up, air power could play a decisive role in ejecting the Japanese from China. The promised build-up came too slowly. In the spring of 1944 the Japanese started a series of drives which gave them a land line of communication from north China to French Indo-China, a real need in view of the insecurity of their sea routes, and the drives in time isolated, then overran, the eastern airfields which had been the key to much of Chennault’s success. In the emergency, a larger share of Hump tonnage was allocated to the Fourteenth and totals delivered at Kunming by ATC grew each month, dwarfing the tiny trickle of supplies that came over the Ledo Road. Chennault received too some additional combat units, but the time lag between allocation of resources and availability at the front was fatal. Different views of strategy and personal disagreements between Chennault and Chiang Kai-shek on the one side and Lt. Gen. Joseph W. Stilwell, the theater commander, on the other resulted in the relief of Stilwell and the division of CBI into two theaters, India- Burma and China, with Lt. Gen. Albert C. Wedemeyer commanding the latter. Heroic efforts by air, including mass movements of Chinese ground forces by plane, prevented the Japanese from overrunning all China. In the last months of the war the combined Fourteenth and Tenth Air Forces were preparing for a final offensive, but the surrender came before this could be developed.

The command system in CBI and logistical problems as well were made more complicated by the deployment in that theater of XX Bomber Command, an organization equipped with B-29 bombers and dedicated to a doctrine of strategic bombardment. The plane, an untried weapon rated as a very heavy bomber, had been developed during the expansion of the Air Corps that began in 1939, and its combat readiness in the spring of I 944 had been made possible only by the Air Staff’s willingness to gamble on short-cuts in testing and procurement. The bomber command, which resembled in many respects an air force rather than a command, had also been put together in a hurry, and the mission in CBI was conceived both as a shakedown for plane and organization and as an attack on Japanese industry. Early plans had contemplated using the B-29 against Germany, but by the summer of 1943 thoughts had turned to its employment against Japan. The prospect that some time would elapse before appropriate bases in the Pacific could be seized plus the desire to bolster the flagging Chinese resistance to Japan, a need in which President Roosevelt had an active interest, led to a decision to base the first B-29 units in CBI. The plan looked forward also to VHB operations from the Marianas, where U.S. Marines landed on the same day that XX Bomber Command flew its first mission against Japan.

To insure flexible employment of a plane whose range might carry it beyond existing theater limits, the JCS established the Twentieth Air Force under their own control with Arnold as “executive agent.” Theater commanders in whose areas B-29 units operated would be charged with logistical and administrative responsibilities, but operational control would remain in the Washington headquarters. This system of divided responsibilities found its severest test in CBI where the command system was already confused and where the dependence on air transport led to fierce competition for all supplies laid down in China.

Operational plans (MATTERHORN) for XX Bomber Command involved the use of permanent bases at Kharagpur near Calcutta and of staging fields near Chengtu in China, within B-29 radius of Kyushu and Manchuria but not of Honshu. Supplies for the missions were to be carried forward to Chengtu by the B-29’s and by transport planes assigned to the command. Delays in the overseas movement of the B-29’s and in airfield construction held up combat operations, the first regular mission being sent against Yawata on 15 June.

The earliest target directives gave precedence to the steel industry, to be attacked through bombing coke ovens. This target system was basic to the whole Japanese war effort and it had the tactical advantage of lying within range of the Chengtu bases. Little damage was done in Japan proper, but a few missions against Manchurian objectives were more effective than was then realized, From the beginning, operations were strictly limited by the difficulty of hauling supplies, especially fuel and bombs, to the forward bases. It was impossible for XX Bomber Command to support a sustained bombardment program by its own transport efforts, and the Japanese offensive in east China which began just before the B-29 missions prohibited any levy on normal theater resources, When the B-29’S were assigned a secondary mission of indirect support of Pacific operations, logistical aid was furnished in the form of additional transport planes which were first operated by the command, then turned over to ATC in return for a flat guarantee of tonnage hauled to China.

Because support of Pacific operations was designed to prevent the enemy from reinforcing his air garrison during the invasion of the Philippines, XX Bomber Command shifted its attention to aircraft factories, repair shops, and staging bases in Formosa, and factories in Kyushu and Manchuria. This shift from steel, considered a long-term objective, to aircraft installations reflected recent decisions to speed up the war against Japan. Attacks against the newly designated targets, begun in October, were moderately successful, but a new Japanese drive lent urgency to the need for additional logistical support for ground and tactical air forces in China; consequently, at the request of General Wedemeyer, the command abandoned its Chengtu bases in mid-January 1945.

Earlier, the B-29’s had run a number of training missions in southeast Asia and one strike, from a staging field that had been built in Ceylon, against the great oil refinery at Palembang in Sumatra; now the giant bombers continued with attacks against Burma, Thailand, Indo-China, and Malaya. Strategic targets, as defined by the Twentieth Air Force, were lacking, and though some important damage was done to the docks at Singapore, operations had taken on an air of anticlimax long before the last mission was staged on 30 March. At that time the command was in the midst of the last and most sweeping of a series of reorganizations: the 58th Bombardment Wing (VH), its only combat unit, was sent to Tinian where it became part of XXI Bomber Command, while the headquarters organization went to Okinawa to be absorbed by the Eighth Air Force.

Measured by its effects on the enemy’s ability to wage war, the MATTERHORN venture was not a success. For want of a better base area it had been committed to a theater where it faced a fantastically difficult supply problem. Something of the difficulty had been realized in advance, but the AAF’s fondness for the concept of a self-sufficient air task force had perhaps lent more optimism to the plan than it deserved. Certainly the desire to improve Chinese morale was a powerful argument, and here there may have been some success, though it would be difficult to prove. Powerful also was the desire of AAF Headquarters to use the B-29 for its intended purpose, very long-range attacks against the Japanese home islands, and in justice to that view it must be noted that the planners from the beginning expected to move the force to island bases when they were available, just as was done. As an experiment with a new and complex weapon, MATTERHORN served its purpose well: the plane was proved, not without many a trouble, under severest field conditions; tactics were modified and the organization of tactical units streamlined. The lessons learned were of great value to XXI Bomber Command, but the necessary shakedown might have been accomplished at less expense elsewhere, perhaps in the southwest Pacific. At any rate, the editors find no difficulty in agreeing with USSBS that logistical support afforded to XX Bomber Command in China would have produced more immediate results if allocated to the Fourteenth Air Force, though it seems dubious that the alternate policy would have made for an earlier victory over Japan.
Posted by Mitch Williamson at 12:01 AM