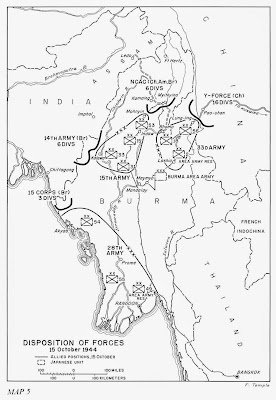 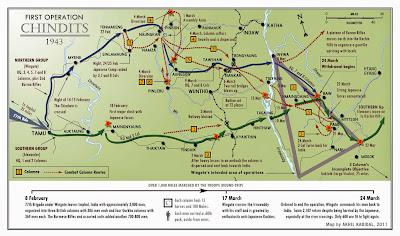 General Archibald Wavell, now commanding in India, worked to prepare defenses against a possible Japanese invasion of that country from Burma. Wavell realized that it would be a year or more until he would have trained troops and sufficient matériel to assume the offensive, but at the same time, he worried about the effects of inaction on British, Indian, and Burmese morale. As a consequence, he decided to conduct a limited offensive action during the 1942–1943 dry season. Accordingly, in December 1942, the British launched a counterattack by the 14th Indian Division of Indian and British units against Arakan, the northwest coastal province of Burma and an area largely separated from the rest of the country by rugged mountains. Although the Japanese there were badly outnumbered, the 14th Division moved too slowly, allowing the Japanese time to build up their strength and to fortify. Iida rushed in reinforcements, and in March 1943, troops of the Japanese 55th Division went on the offensive and worked their way over the mountains to hit the British in the flank and force their troops back to India by May. The British had again been proven wrong in their assumption that the Japanese would stick to existing roadways.

Meanwhile, Brigadier General Orde Wingate secured Wavell’s approval to try “long-range penetration attacks” with his 77th Indian Brigade, known later as the Chindits (their emblem was a chinthe, a mythical Burmese beast resembling a lion, and they operated beyond the Chindwin River). This move was a British effort to try to beat the Japanese at their own game in using infiltration tactics. The Chindits would operate deep behind enemy lines in an effort to damage Japanese communications, destroy supplies, and sow confusion. The force of 3,000 Chindits would rely entirely on aerial resupply for food, clothing, medicines, and arms.

The first Chindit raid began with a crossing of the Chindwin River in February 1943. The force managed to cut sections of the Mandalay-Myitkyina and Mandalay-Lashio railroads, and in mid-March, they crossed the Irrawaddy River. This latter move brought major Japanese reaction, forcing a Chindit withdrawal in April. Newspapers in the Allied countries claimed a great victory, but in reality, the raid had been a failure militarily. The damage to Japanese troops and positions was slight, and the raiders lost half of their force.

Although the British fared poorly on land, the Royal Navy continued to control the Indian Ocean, which was immensely important for the long supply lines to the Middle East and to the Soviet Union. Meanwhile, to secure the loyalty of Indian nationalists, the British held out the promise of eventual sovereignty after the war. The major Allied problems in the Burma Theater remained the nearly complete lack of cooperation between the British and Chinese strategists, the inability to cope with Japanese tactics, and inadequate resources and supplies for a fighting front far down the Allied priority list.

Stilwell now mounted a drive into northern Burma. In February 1943, he committed the American-trained reconstituted Chinese 38th Division in upper Assam on the Burma-India border, where U.S., Chinese, and Indian engineers were building a road from Ledo. The 38th Division drove the few Japanese from the area. In late October, having secured the reluctant support of General Wavell and the agreement of Chinese Nationalist leader Jiang Jieshi (Chiang Kai-shek) to employ his forces to reopen a land route to China, Stilwell committed the 38th Division south into the Hukawng Valley, where it was resupplied entirely by air. At the same time, the Chinese 22nd Division moved up from Ramgarh to Ledo. Meanwhile, Stilwell pushed construction of the road from Ledo.

In late November, Japanese forces struck the 38th and subjected it to punishing attacks, completely cutting off some of its units. U.S. aerial resupply prevented the Japanese from overrunning the troops, however. At the end of December, Stilwell arrived, along with light artillery, and the Chinese then counterattacked, driving the Japanese from the Hukawng Valley.

During January and February 1944, there was stalemate in the Hukawng Valley. Japanese Major General Tanaka Shinichi’s 18th Division halted the advance of the Chinese 38th and 22nd Divisions. The Chinese resumed their advance in late February.

Much of the rest of Burma had remained quiet throughout 1943. In a considerable engineering feat, the Japanese built a 250-mile-long railroad across Burma, in the process employing as slave labor British prisoners captured at Singapore and some American captives. The Japanese utilized the railroad to mass supplies for an attack on eastern India. On 1 August 1943, they also granted Burma its “independence,” although this step did not resonate sufficiently with the Japanese-installed Burmese government to enable Japan to exploit fully Burmese rice and petroleum resources.

The Japanese reorganized their forces in Burma, which were under the overall command of the Southern Resources Area commander, Field Marshal Count Terauchi Hisaichi, in Saigon. In March 1943, Lieutenant General Kawabe Masakazu had assumed command from General Iida of the six Japanese divisions in Burma. Kawabe had direct supervision of the two divisions in southwest Burma; the other four Japanese divisions were in the north under Lieutenant General Mutaguchi Renya. Kawabe directed Mutaguchi to invade eastern India with three of his divisions, and toward that end, the Japanese amassed some 100,000 troops. The Japanese intended to seize the Imphal-Kohima Plain of Manipur, the logical British staging area for an invasion of Burma from central India. Their second major goal was to take and hold the rail line into Assam that passed through Manipur. Along it flowed most of the supplies that were ferried into China, as well as those destined for Stilwell’s divisions in north Burma.

On the night of 3 February 1944, the Japanese attacked in the south, and once again, they surprised the British with the size and speed of the assault. But the now experienced British and Indian troops held their positions even when surrounded and did not surrender their supply dumps, which the Japanese needed to support their advance. British and U.S. aircraft flew supplies to the defenders in Imphal, and other aircraft strafed the Japanese. General Slim also organized a relief column, drove it to Imphal, and broke the siege after 88 days on 22 June. After desperate fighting by both sides, the Japanese, short of supplies and facing the onset of the monsoon season, called off the attack, and Fifteenth Army began to withdraw.
Posted by Mitch Williamson at 12:26 AM