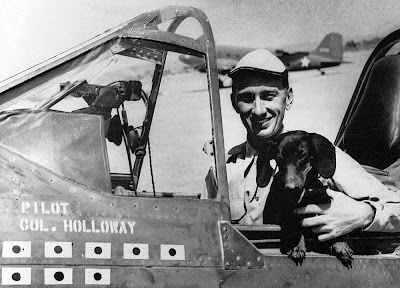 By John L. Frisbee
As a P-40 pilot with a "frontier" air force, Bruce Holloway launched a career that led to four stars.
In May 1940, the US was not at war. China was, fighting for survival against Japanese invaders. The US agreed to let Chiang Kai-shek have 100 older P-40Bs with crews to be recruited from the Army and Navy and trained by Claire L. Chennault. One disappointed would-be volunteer was Lt. Bruce Holloway, West Point 1937. Only Reservists were eligible.

Two years later, the US was at war. Bruce Holloway was sent to Chennault's American Volunteer Group (AVG), the Flying Tigers, as an observer. On July 4 of that year, the AVG was disbanded to become the nucleus of the AAF's 23d Fighter Group, later Fourteenth Air Force. During his 18 months in China, Holloway rose from major to colonel; he commanded first a squadron, then the 23d Fighter Group, and finally Fourteenth Air Force Advance. He became one of the first AAF aces of World War II and returned to the States in November 1943 as the leading ace in the China-Burma-India theater, with 13 confirmed victories.

When we talked with one of the AVG/23d pilots who flew with Bruce Holloway, he said Holloway was the smartest combat leader he flew with--a man who led all the tough missions. He continued, "You'll never get a story from Bruce about his own heroism. He would consider that bragging." General Holloway's unpublished diary of his China days bears that out. There is plenty of combat narrative about other members of the 23d, but in his own case only the facts: "Shot down two today." "Got behind a Zero and told my wingman to take it."

What did Bruce Holloway find when he arrived in China? First, the most colorful collection of airmen ever assembled anywhere. Next, absolute austerity: no navigation or letdown aids in a region of chronic bad weather, maintenance done in the open, a warning net of Chinese who reported sight or sounds of enemy planes by radio or phone, constant shortage of all but spirit. Everything used by the 23d Fighter Group (and later by some bomber squadrons) had to be flown over the Hump in the longest supply line of the war. It was comparable to a frontier cavalry post in the early days of the American West. There seldom were more than 50 fighters operational to cover an area as large as western Europe, but, despite all their problems, the 23d's pilots led by Holloway shot down enemy aircraft at a rate of 10-to-1.

An April 1943 mission typifies Bruce Holloway's leadership. When General Chennault was away, as he was at the time, Colonel Holloway and Col. "Casey" Vincent were responsible for operational decisions. There undoubtedly were lucrative targets on Formosa (now Taiwan), some 500 miles from the easternmost Fourteenth Air Force base. Holloway decided to find out.

It would be a solo reconnaissance because "I didn't want to risk losing more than one airplane in the event I got lost or the weather socked in completely." Flying his P-40 across the 100-mile-wide Strait of Formosa from a crude Chinese Air Force base near the coast, he found many bombers at airfields near Taihoku and Sinchiku while ducking in and out of a 1,500-foot overcast to avoid enemy planes. On the way back to the mainland, he shot down an enemy bomber "with about 15 rounds" to complete a daring mission that set Formosa up for future bomber strikes.

Holloway was shot down once--by ground fire--while strafing a column of trucks several miles west of the Salween River in Burma. His Allison engine ran for three minutes with no oil pressure, enough to get across the river into China. Once the Chinese peasants, who knew little about the war, were convinced he was on their side, they sent him on a triumphal five-day journey by pony, horse, and charcoal-burning truck to Yunnanyi, whence he was flown to Kunming.

One of General Holloway's most unusual experiences could only have happened in China. The Yunnan government requested help for a remote town on the border of Tibet that was besieged by bandits. He took three P-40s to the walled city of Chungtien, located at 13,000 feet in a beautiful valley surrounded by 20,000-foot peaks--a Shangri-la setting. Six frag bombs dropped on the bandits outside the wall lifted the siege.

After the war, Bruce Holloway commanded USAF's first jet fighter group. He rose to General through key command and staff assignments, and, after serving as vice chief of staff of the Air Force, was named commander in chief of Strategic Air Command. He continued to be an active pilot until his retirement in 1972 and is the only four-star general to check out in the SR-71.

Jimmy Stewart, one of the General's old friends, said: "Anyone who knows Bruce Holloway knows he has never forgotten the difference between machines and people. You keep machines going with wrenches and hammers, but people with human understanding." That just about sums up this distinguished but unassuming man of great good sense, admired and respected by all who know him.
Posted by Mitch Williamson at 2:28 PM

Email ThisBlogThis!Share to TwitterShare to FacebookShare to Pinterest
Labels: Biography